I also don't want to just leave everybody wondering forever, what happened.

She was in congestive heart failure, very suddenly. She was fine, and then she was not fine, and we couldn't make her suffer. We stayed with her, of course.

We gave her the best life we could. She was happy, had toys, had so much love. She was my first girl, my best girl, and I'll love her so much, forever. 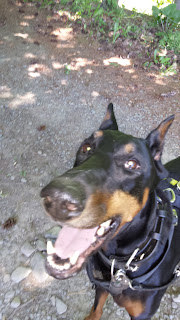 I won't be updating this blog anymore. Previously, I'd left it because I'd just moved my creative energies to my fiction writing, not because anything bad had happened. I'm sorry to have left you waiting for so long.
Posted by Jen at 11:34 AM 19 comments

So I mentioned back in February (!) that I was going to have some writing news for you guys.  And now, here it is.

My second publication has arrived! My short story "The Lion and the Dragonslayer", is in the anthology Mosaics 2: a Collection of Independent Women. You can find it on Amazon, both for Kindle (Smarturl.it/Mosaics2) and in paperback.

Each author had art for their story, which I thought was amazingly cool. Here's mine: 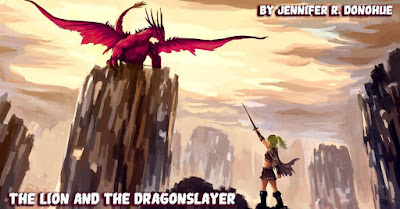 Additionally, Mosaics volume 1 (which I am not in, but has some grand stories) is on Kindle sale for 99 cents all week, to celebrate the Mosaics 2 release: smarturl.it/Mosaics1

Proceeds from both volumes go to the Pixel Project to Stop Violence Against Women.

I missed both Wordless Wednesday and National Puppy Day in one fell swoop, so here's one of my first Elka puppy pictures. 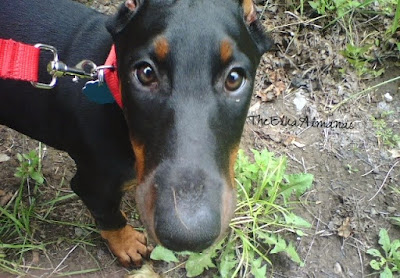 What Elka (and I!) have been up to

We're still here. I know it's been awhile.

Let's see, where did we leave off?

We took the standard New Jersey trip at Christmas. My grandparents' neighborhood does luminaries on Christmas Eve, and so Elka and I helped with that. 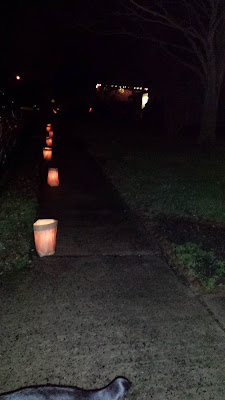 Donations are being matched, dollar for dollar, from December 15 to December 31. 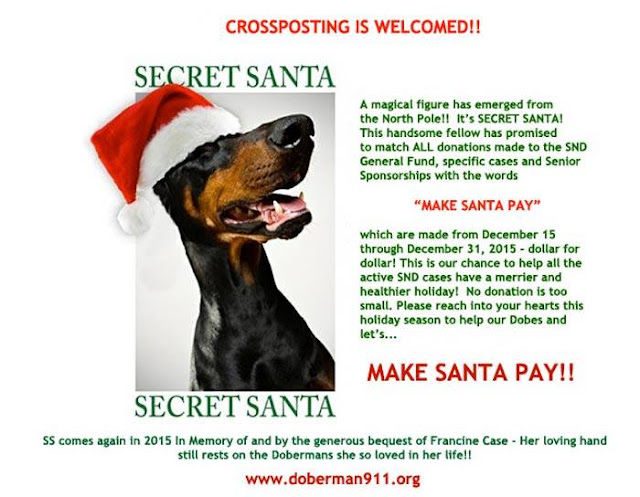 As always, there are a number of General Funds cases who really benefit from any funds that SND can receive, in addition to the Senior Doberman Project and the Seniors Medical Fund. So let's get that info out there and help these Dobermans have a healthy and happy holiday and year to come!

A few years back (in 2012, I've been blogging here for awhile!) I wrote about ProjectDog, and how they had a Doberman survey. I was contact recently by a breeder who would really like to see ProjectDog get some much needed funds, asking me if I was willing to blog about them again. I was provided with a linki to a fundraising campaign to fund research on Vestibular Deafness in Dobermans (affected dogs are referred to as "dings", but I'm going to use the other, less mean sounding, DVDob). It's "vestibular" deafness rather than the usual sort, because frequently it also severely impairs the dog's equilibrium.

According to this article (which quotes Ann Ramsbottom, the Doberman breeder who uses the Cambria prefix, who has had a lot of very beautiful and successful dogs), a gene for DVDob was isolated in 2012, and is an autosomal recessive mutation. Meaning that, like Von Willebrand's Disease, a dog who is a carrier can be bred to a dog who is "clear", and the resulting puppies will not be affected by DVDob. But they still don't know if the gene is related to other things, more prevalent in certain lines, associated with other genes, etc. and would really like the research to move forward. Frequently puppies are so badly affected that they are euthanized before they get very old. To paraphrase the Cambria breeder's quote from the above article, They seem to be in constant discomfort, have trouble locating the nipple to nurse, have trouble latching, and that's if the mother doesn't push them away.

Breeders don't want to have to watch their puppies suffer, and definitely don't want to have to make the tough decision to euthanize puppies when they're still only a few weeks old. It would be a great boon to learn more about DVDob and its causes, and build a database of dogs who are carriers, clear, and affected to be aware of these factors as well while breeding.

And before you think "It's just deafness, what's the big deal?", take a look at the video on the top of the Go Fund Me page for ProjectDog to study Doberman Congenital Deafness. It's of a three week Doberman puppy affected by DVDob. The puppy struggles around on the surface where he was placed (granted, there's only so well three week old puppies move anyway), unable to even maintain an upright posture. His head movements are jerky, unnatural and heartbreaking, as are the little cries he's making. He looks, to me, like a wounded animal. It seems rough to say, but it doesn't surprise me that a dam would reject a puppy like that, if the rest of the litter seems "normal" and viable.  There's another video on the page of a 10ish week old puppy affected by DVDob, and these physical symptoms have not gone away. She falls over for no reason, she cries, she staggers around. It breaks my heart (and might break yours, so if you don't want to sit weeping at the computer, perhaps don't watch those videos).

So, if you're able, I urge you to donate what you can to ProjectDog so they can resume funding research in this area.

Bonnie, with Illinois Doberman Rescue, is SND Senior of the Week

This is Bonnie. She's the Special Needs Dobermans Senior of the Week!

Bonnie is a 7 year old cropped and docked red girl who's with Illinois Doberman Rescue Plus.  According to their page, she was surrendered to a shelter when her elderly owner died, and was adopted out. Unfortunately, she and the resident dog were not a good fit, and when her subsequent owners returned her to the shelter, the shelter contacted IDR+.