On Friday I posted about the DNA survey for Doberman health. I got my sample package super quick! I swabbed Elka this morning and mailed it out. She let me do it without any kind of a struggle, but was overall less than enthused.

So, what do I think qualified Elka for the Doberman health study? Well, first off, every study needs a control group. Even if she wasn't "normal", they still might have wanted a DNA sample. There were two things on the survey that Elka displayed, though: Idiopathic Head Tremors, and a specific preference for a toy. We've talked about Gumby Love here before, but we haven't talked about the head tremors. 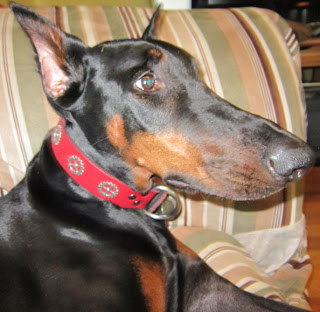 Idiopathic head tremors essentially mean "the dog's head shakes, we don't know why!" It is, theoretically, harmless. Some Dobermans have full on seizures, and depending on the head tremors, it could in face be a seizure behavior. Elka's head tremors have always seemed to be stress related, or at least want related. The very first time we noticed them was after she was spayed, when she was still wearing the cone of shame. We wondered if it was from the cone touching her ears, and she was shaking her head to avoid that, but further inspection and observation showed this was not the case.

She has done it when I, irritated and at the end of my rope with her whining, told her to go lay the f down (I apologize, gentle readers, but even I get fed up sometimes and that whining....that whining...and I tend to only add expletives after she's already been told and directed and still hasn't complied, or immediately broke compliance). She did it her first Thanksgiving, when we pulled that big old bird out of the oven to carve it. I've been told by housemates that she's done it if I've left after returning home from work to go to the store. 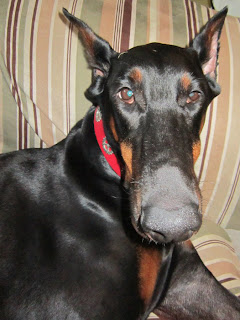 (we went for a walk first and had some cooldown time before I started swabbing. Can you tell?)

During the head tremors, it is obvious that Elka is entirely aware. Her ears are up, she responds to her name, will respond to cues, and very certainly wants whatever food it is you're going to give her. Frequently, just calling her over and having her sit will focus her and the "spell" will stop. Sometimes it takes a treat. I know some Doberman owners will use a granola bar (raisin free!) or peanut butter. Some people speculate it might be a blood sugar thing. Others wonder if it correlates to Wobbler's. Maybe this DNA survey will find that out!

I've never recorded Elka's head tremors, because whenever I see them, I just want them to stop. She's also never performed them say, in the vet's office, where they might have any idea what I'm talking about (I think she's the first Doberman they've seen). There are some videos on YouTube, though. Thor, below, goes through a battery of cues with the tremors persisting. He also seems super stressed, and is a little foamy. It is a pathetic thing to see, even if it does appear to be harmless.