The Unbreakoball: Seriously, what's the deal?

Back on June 4, I reviewed The Unbreakoball. I  mentioned that Elka was scared of it, or at the very least, displeased. I also speculated that perhaps it would work as an outdoor toy.

We had a brief interaction with a toddler this week, where the little girl threw/dropped her basketball to Elka, who obliged by pouncing it, and dancing with her paws on either side of it, trying to pick it up. Everybody was delighted, I picked up the ball myself after a few minutes, and everybody went home happy. Unbreakoball outside then, I thought. This will be great! 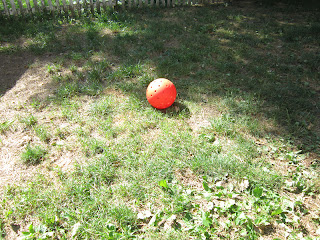 So, I called her over and pointed the ball out to her. 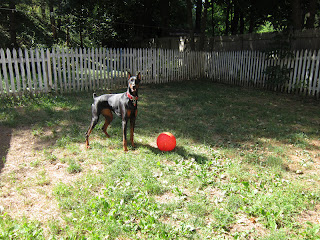 I pushed it, and she did the dance for a second. 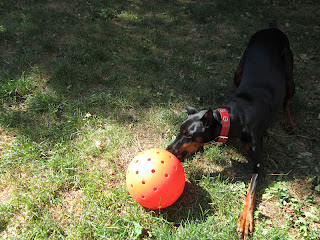 Then she ran away and had some zoomies. 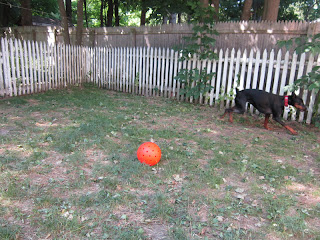 I was able to compel her to return for a second go. 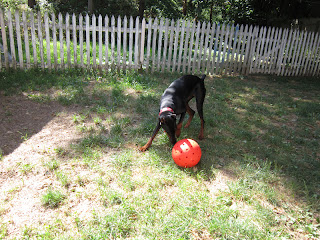 Seriously, though, what's the deal? Is it because it's so big? Is it because it's plastic, not rubber? I really thought this was going to be an amazing toy for her. She did push it in the house with one of our friends for a little while, back and forth, a couple of weeks ago. But that's been it! I'm amazed. I do think I'm going to get the smaller size, to see if she'll play with that. I'm not sure if the lifetime guarantee applies if the ball is out of the recommended size category for a dog, however.

Email ThisBlogThis!Share to TwitterShare to FacebookShare to Pinterest
Labels: Doberman, made in USA, outside, play, unbreakoball