Birthday BBQ at the park

Sunday was pretty busy! I already posted about the walk that Elka and I took (or one aspect of said walk, anyway). I didn't tell the story of the whole day, though.

See, after we got back from our walk, we cooled down for a bit, and had some water. Then we got in the car and (wait for it) went back to the park! It was our friend's birthday, and we were invited. 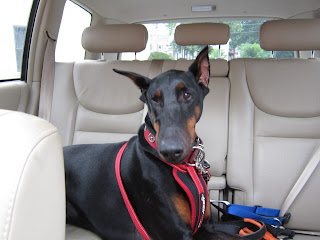 There were not one, not two, but three babies of varying ages. There was much sniffing, and a tiny bit of licking. Baby feet are apparently a very special thing. 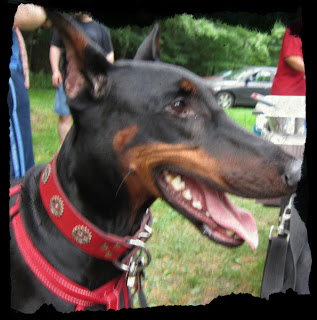 There were hot dogs, and hamburgers, and some kabobs. Elka was very excited by all of these things! We worked on "leave it", which in general works pretty well. I was able to do things like get a hot dog on a bun, and then set it down right in front of Elka to wrangle the ketchup, with a casual "leave it". I confess, I like showing it off. Any time I had to reposition her away from other food, she was just at the sniffing stage, nothing was in imminent danger of going into the toothy maw. 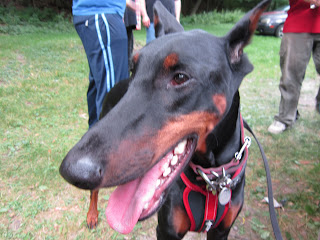 Some Frisbee was played, and Elka picked it up a couple of times for people who missed their catch. It was a hard plastic Frisbee, not a dog one, and there was a point at which it landed flat on the road that runs through the park, and Elka had to work really hard to get it flipped over that she could pick it up! I would have helped her but, well, I was laughing too hard. Oops. Somebody finally thought to get out a camera phone to record her, but she picked it up by that point, and took it to the birthday boy. 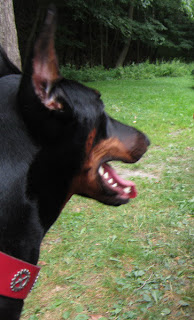 Email ThisBlogThis!Share to TwitterShare to FacebookShare to Pinterest
Labels: babies, frisbee, leave it, monday mischief, park, party, pick it up