Because I'm a nerd, I sometimes look at the dictionary for fun.

Because I'm a tremendous nerd, I sometimes look up Doberman in the dictionary.

This time around, I was so struck by the picture that I didn't even read the definition. I'm sure it said something like "breed that originated in Germany, developed by Karl Friedrich Louis Doberman."

The picture, though. No wonder Elka was accused of being a greyhound mix. The Doberman in the picture is rather...stout. It's hard to tell in the picture (sorry), but her tuckup is not all that pronounced. Her tail is a bit too short for my tastes, and she doesn't seem square. 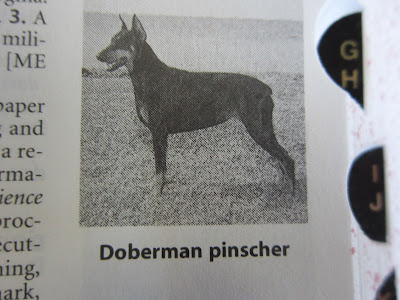 I frequently wonder, in dictionaries and encyclopedias and dog breed books and dog training books, who are these dogs? That I've seen, there is rarely credit given. Wouldn't it be fantastic for dogs with Championships, working dog titles, or both, to be the Dobermans used in books of that sort?