On Our Sunday Walk...

Today on our walk, we saw:

I don't have pictures, because I don't want to be a weirdo who randomly takes pictures of people on the street, but do they have the corner on the market, or what? 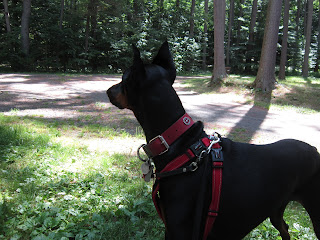 The Rat Terrier started barking as soon as he saw Elka. The owner started in with the "Oh, that dog is so big, what kind of fight are you trying to pick."

Elka started to do the dance around and huff thing, and I reached down and put my hand on her shoulders and said "Hush, honey, he's barking like that because he's scared."

To my surprise, the dog's owner agreed with me. She admired Elka's beauty, and asked what she was; she seemed a little surprised and/or dubious at the Doberman status. She's not an imposter, I swear. Come on, people! They walked past rather normally, the little dog bouncing on her leash, the owner smiling and willing to exchange small talk. The dog's owner also mentioned that her dog had been attacked by a pit bull the other day, and I thought "oh, here we go." Then she surprised me. She said "I heard a noise, and we'd been walking by a house where I saw the dog and thought it was all right, because it was tied. I guess it broke the tie, though, because I heard the noise and looked down and she [her dog] was on her back on the sidewalk. The pit bull was just a puppy, though, and must have actually wanted to play, because it could have bitten her in half with as much time as it had." 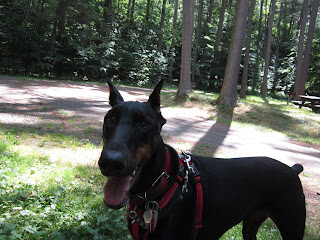 We proceeded on our way, and then saw somebody I recognized from the library, who had just finished petting a pit bull who was ahead of us. She smiled and said "Oh, hello. Is your dog friendly?" When I said yes, she said "It's funny, you don't think of Dobermans and pit bulls as friendly dogs, and  yet here we are." So then we had a small Why a Doberman conversation and went on our way. 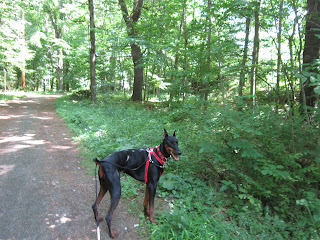 After the park, we walked through town a little bit. We saw yet another person I recognized, who was walking his Airedale, who proceeded to gallump around in an excited and happy way. Elka, who does not know other dogs, was unsure of what she should be doing and backed off. She growled a little and barked once, and then the dog stopped and they just looked at each other. I explained, the owner got it (or seemed like he got it) and we all went on our way. That's one of my two regrets with her: one, that I didn't start clicker training from day one, and two, that I didn't find other dogs to socialize her with. She's great with people, but with other dogs, she's just in uncharted land. She doesn't "go nuts", there hasn't yet been a point at which I thought I'd lose control of her, but she needs space, and time to make her own decisions, in order to be comfortable with another dog being there. 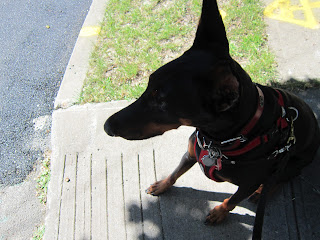