I think this look says "I'm sleepy, you took my collar off, and you're taking my picture? Seriously?"
Read more »
Posted by Jen at 12:00 AM 15 comments

I'm able to share this review with you, product made available courtesy of Chewy.com!

I picked the Natural Balance Jerky Bark treats because the flavors sounded interesting (subjective, I know; I'm not going to eat them) and because they're made in the United States. We got the Chicken and Sweet Potato. They're grain free, which is not an allergy issue with Elka, but just a preference for me when it comes to purchasing her ingestible products.

As always, she was very excited to see the package come in the mail. Poor dog; most of the time, the packages we get are books or similar things that have nothing to do with her. But frequently enough, it's toys or food or treats, and well, we know about random reward schedules. So she gets excited.

Things to do if you've found a lost dog

I'm sure it's happened to many of us at least once. We find a dog we don't recognize, with no tags. Friendly, but no humans apparent.

It's a dog owner's nightmare, really. Their dog gets loose, gets stolen, wanders. It happened just last week, with the dog my coworker found. Apparently she was a very very old dog, and had been through medical treatments lately. So, not mistreated. Just old and ill and with doggie dementia, and wandered off as her family cleaned the cellar of a Sunday. They were very grateful and happy to have her back, though I don't know what her real name is; I don't think the vet told my coworker when she called.

It's one reason I have all the tags I do on Elka's collar, on two separate rings. If one dangling rings gets lost, maybe the other will still be there. Plus her microchip. Some breeders tattoo their dogs (under anesthesia, I believe), inside the ear, or inside the inner thigh. That's a visible identifier that cannot be lost. It's why, on our car trip, Elka was on a harness attached to her leash, and with the dogIDs collar on separately, with its name plate.

Keeping your dog cool in the summer!

Infographic is courtesy of The Uncommon Dog!

I guess Elka's used to the new couch?

So, Elka's on the red couch more and more. Which is fine; as I've stated over and over, we are a Dogs on Furniture household.

What's funny to me is her habits with the couch, the pillows, and her toys. Most of her proclivities, I find pretty adorable, and it's always interesting to me to see what habits and preferences she'll develop (as near as I can tell) on her own.

When my BFF coworker got to work today, she said "Oh boy, I have a story for you." And I waited with bated breath because really, her stories are pretty good.

She and her husband were driving to see his parents, and when they were in a little town just outside Hartwick, NY, she saw a dog by the side of the road. She ordered him to stop the car, and leaped out once it was stationary.

The dog she saw was emaciated. As in, shoulderblades, hip bones, and leg bones visible when the dog moved. The dog wasn't moving much, just kind of milling around I guess. Though it's been a bit cooler here, it was still a good 85 degrees and sunny. And the dog had a chain around her neck. No tags.

With some gentle, gentle coaxing, my coworker got the dog to approach her and received a lick on her hand for her trouble. The dog seemed terrified of just everything. They took a long, sloooow walk back to my coworker's car, the dog occasionally pausing to sniff my coworker's hand again, give her a lick, and start walking again. Once at the vehicle, they were able to coax her into the back seat, and had to give her a boost when she just wasn't able to get herself there.

They stopped at the next gas station they saw and bought a bottle of water, and asked the attendants about a non emergency police number, animal control, something.  It turns out there was an animal clinic the next town up, Exeter Veterinary Clinic in Richfield Springs New York, and that's where they took her. The vet there is Pamela Lea.

The dog had no tags, no microchip, nothing. The vet estimated that she's older, maybe 11, partially deaf and with cataracts. They're going to keep her there and try to get some weight back on her. When my coworker called today, she was eating and drinking. They hadn't heard anything from or about an owner.

My coworker and her husband named the dog "McQueen", after Steve McQueen, specifically because of The Great Escape. She took a single picture, which told me I could share. If no owner is found, no charges brought, what have you, my coworker and her husband unfortunately can't take McQueen; they just moved to an apartment where literally every other house pet is allowed but dogs. 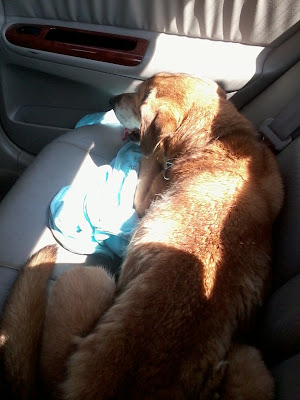 I was approached by dogIDs.com to do a product review, and after having a look at their offerings, I just had to say yes! I selected a deep red bison leather collar, which was personalized with an engraved nameplate, and a matching deep red bison leather leash. I told Elka what I'd done (she listened, anyway) and we eagerly awaited the delivery.

Phoenix in Southern Doberman Rescue really needs help (warning, one graphic image at the end of the post)

Southern Doberman Rescue is a 501(c)3 pending organization in Alambama that is working to help Dobermans in the Southeast United States.

Recently, they took in a dog from Alabama who had been dumped in the overnight animal control pen. They don't know how old she is, or how long she's been ill, or even the extent of what's wrong with her. But Phoenix has a horrible case of Demdex mange. Horrible. Remember Manny back in January (if you click that, please be advised the pictures are bad)? She's worse than Manny. Much, much worse.

Southern Doberman Rescue currently has Phoenix at their vet where she can be monitored and treated. In addition to the mange, she has a fungal infection, may or may not have cataracts, and her hearing might be affected. Her feet are dreadfully swollen. She is heartworm negative, so that's one thing gone right for this poor girl. The condition she's in would have had to take months to reach, which makes me sick. I don't know how somebody can allow a dog in their care to get in such a state, and then dump them overnight. Phoenix and SDR could really use any donations you could make in order to help out.

Also, please share her link with her story: Phoenix is in SDR. Getting this info out can hopefully get the rescue and this dog's story the exposure and help they need.

I put a picture of Phoenix behind the cut. Warning, it is a graphic image. she is a picture of neglect, and I debated whether I should include a picture. But this is what can happen, folks. I do apologize if I upset anybody.

Checking "the scene" for a dog to post about on the Tuesday Tails blog hop (sigh, there are so many), I noticed that Distinguished Doberman Rescue, Inc. (in Pennsylvania) now has a Seniors for Seniors program.

Duchess the red Doberman (called "brown" in news sources, but I forgive them), is a rescue. She's been with her family for 3 years, after having been adopted from the local shelter. 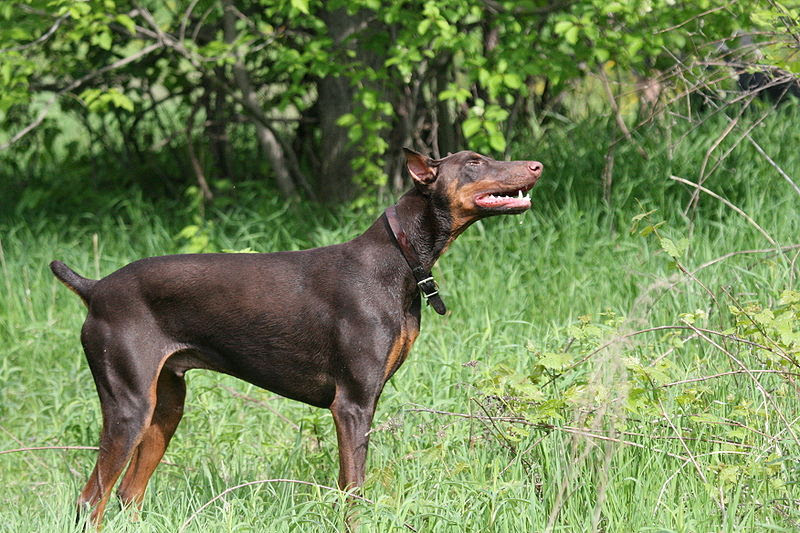 At the Main Line Animal Rescue in Chester Springs, PA, they don't know how old she is. They estimate that her birthday is May 11, 2011. And that's literally all the information there is on pretty Virginia. No history, no indication as to whether she was a stray, or an owner surrender. I do hope she finds a home soon! This is their adoption information and requirements, should you be interested in bringing Virginia into your family.

I talk about National Novel Writing Month here a bit more often than perhaps a dog blog warrants but, I'm sure you'll forgive me. Other doggie content will happen this week, don't you worry. Also don't worry if I drop my current Monday through Friday posting schedule for awhile; I'm perfectly all right, just embroiled in another project. 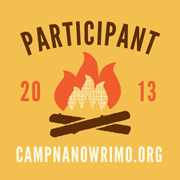 The Elka Almanac featured on Valuepenguin

Valuepenguin.com has a Top Ten Pet Blogs of 2013 list, and The Elka Almanac made it on! 2013 is a bit young, but more than half over (sigh) so I guess it isn't jumping the gun, right? If you have a look, there are some other familiar faces on there! 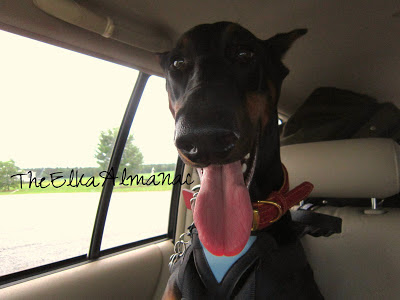 Happy 4th of July (Elka at the beach)

As I mentioned, we were in Cape Hatteras last week. We tend to be so busy doin' nothing on vacation, I don't live blog. But, I did take lots of pictures!

For the Glorious Fourth, I thought I'd share some of the beachy ones of Elka. I do hope you enjoy. She sure did! She did some mouth-fencing with the waves, and even came in once with me, chest deep, before she ran out again. 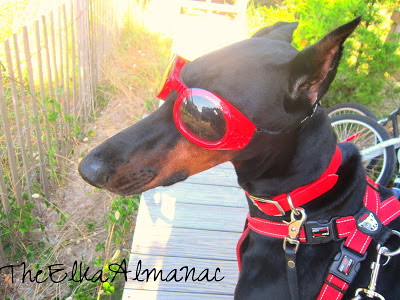 Blitz is an adorable red boy who was pulled from a shelter in Georgia by DAN into a foster with Distinguished Doberman Rescue. He's 10 months old, natural eared, and with a docked tail.


A family with good Doberman skills is preferred, somebody who can set rules and boundaries, and teach Blitz all of what life has to offer. At 10 months, he's sure to be a handful (what puppy isn't, really?) but also at that age where he can just learn so much.

If you or somebody you know is interested in adopting Blitz and feels they meet these criteria, here is the link to DDR, inc's application process.

Why We Give Elka People Food

Last week, in North Carolina, my family was on vacation as well. At dinnertime, Elka was very attentive of what was going on with regards to peoples' plates (at at non-nose touching distance, but close sometimes), and I did confirm that yes, she will eat a baked potato (she loves them, even plain!) 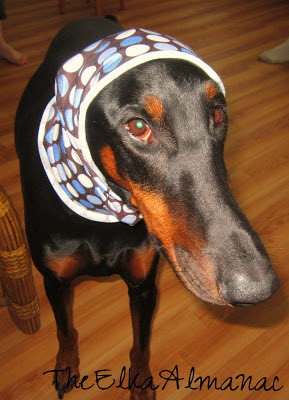 We spent last week in Cape Hatteras, North Carolina. The drive down is 12-13 hours for us, depending on traffic and stops. Elka is very good in the car, and doesn't even puke anymore, now that we give her Dramamine (per the vet's recommendation and instructions).

On our drive down, the car was a bit more crowded than on the way back. We had more snacks packed, more booze, y'know, things like that. At one point (probably about....hour 11), my fiancé goes "Why do I smell banana?"

(car was stationary when all pictures got snapped)