You've probably noticed by now that a lot of Elka pictures are of Elka on the couch.  Or on a chair.  None of them have been of Elka on her bed.

The fact of the matter is that Elka can be on the furniture, pretty much carte blanche.  We say "move" or "off" if where she is is not convenient for a human household member.  She has the privileges for a couple of reasons; for one, keeping her off of the furniture would really be more trouble than its worth to me.  We've got slipcovers on a couple of them and she can't have food on them (a restriction that does not extend to the humans).

Some people are of the belief that letting your dog be on the same physical level as you or higher will cause the dog to perceive her rank as equal to or greater than yours, and she may try to assert her dominance over you.

In a nutshell, the notion of dominance in dogs comes from studies done on captive wolves, decades ago. Captive wolves, mind you, not wolves in the wild, who are able to choose who they run with, and who in fact tend to be family groups.  There are a number of situations that some people believe causes dominance in dogs: allowing your dog on the furniture, allowing your dog to sleep with you, allowing your dog through the door first, allowing your dog to eat before you.
Elka is not a dominant dog; she is in fact relieved to not have to be in charge and make decisions.  Sometimes what I tell her, after "leave it", if there is a dog barking or people screwing around in one of the houses across the street, is "You don't have to worry about that.  It's not up to you."  Maybe by saying it, my tone and body language establishes my dominance; I doubt it.  Really, it's just not a term I use and subscribe to when it comes to my dog.

Furniture, though, is comfortable.  I want to sit on the furniture, and would feel pretty upset and left out if somebody didn't let me.  And when we got Elka, we decided she'd be allowed on the furniture.  She does have her own bed, which tends to be one of those big, cheap pillow-style ones you can get at Wal Mart or the Feed and Seed.  When there are no other options, she'll lay on it.  But she doesn't prefer it. 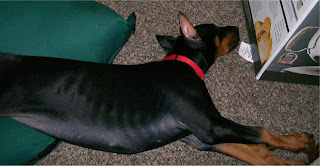 When she was a puppy, we did not crate train her, but we restricted her to the downstairs bathroom or the kitchen (all the same area, essentially) using the door or a baby gate, for so long as her potty training was unreliable.  She dragged her pillow bed into the shower stall to use it during that time.  Once she became reliable, though, we started allowing her to sleep with us.

This is one of those situations that when she is good, she is very very good, and when she is bad, she is horrid.  For the most part, she will curl up in an Elka-ball against you and go to sleep.  Or some nights (like last night) she will periodically stand up and move around, or lick-attack her butt, or decide to whine about something.  She will step on you, and sometimes it will be your head that she steps on.  "Paw inhibition", like bite inhibition, is something we're working on, though it hasn't gone nearly as well.  She's never bitten us, beyond the very early puppy mouthing.  Stomping, though?  That's pretty frequent.
Does stepping on us mean that she feels dominant?  Or is she just clumsy, because even though she's not technically a puppy anymore, Elka still seems to be all legs and feet?  I'm more than willing to believe the latter, especially because she's done things like dent the wall with her head while gamboling around the house. 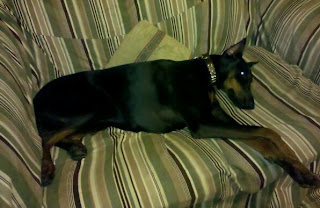 When it comes down to it, Elka's comfort is something that I do think about.  I've also thought about getting her one of those swank Kuranda dog beds, but at $84.95 for the XL size that my 77 pound darling would need, that's a little too swank.  So far as human comfort goes, I can buy a decent amount of groceries or entertainment with eighty five bucks.
The Doberman is a breed of dog that wants to be with her humans, and being on the furniture or in bed with us satisfies that.  Her age probably contributed to this as well, but her general calmness increased when we started letting her sleep with us at night.  Enforced separation is something that doesn't make sense to Elka; she just doesn't understand it. 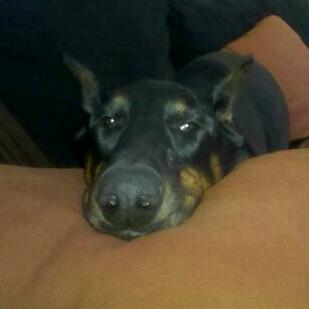 And really, when your dog smells like brownies when she sleeps, and when her fur is like velvet, she's a nice thing to have around.
Posted by Jen at 5:44 PM