Love dogs in books? 4 Things Writers Keep in Mind When Putting a Dog in the Story (Guest post!)

Barbara Wallace, Shirley Jump and Jackie Braun and I had a blast writing THE BILLIONAIRE’S MATCHMAKER. We all agreed that Charlie, the Jack Russell Terrier, was the cutest thing in the world. And he gave the story a layer of emotion we knew wouldn’t have existed without our wonderful boy!

But we also learned a few things about putting a dog in a story.

My biggest take away was that an author who wants to put a pet in a book needs to give the dog a job!

Readers who love dogs know they aren’t merely cute window dressing.  Lassie and Old Yeller were stars. In real life, dogs are beloved family members. They have personalities. They’re smart. And they are definitely part of the action! The story for THE BILLIONAIRE’S MATCHMAKER didn’t gel until we realized that cute and lovable Charlie couldn’t just walk from story to story. He had to play a part. And what’s more fun than a pup who realizes the people he’s with belong together forever as friends and lovers – life partners. Dogs are intuitive. Dogs are love wrapped in fur. Making Charlie a matchmaker was a perfect fit for both him and the story!

Barbara Wallace’s advice is to make sure the dog fits your “human” character.

“As in real life, when choosing a dog, you need to select a breed and personality that meshes with your characters’ personalities and lifestyles. Would your dark, brooding hero own a Chocolate Lab or German Shepherd? Depends upon his backstory and current situation. I once wrote a proposal in which my workaholic heroine had a dog who kept breaking out of her apartment. My editor rightly pointed out that a workaholic, city-dwelling career woman most likely wouldn’t make the commitment a pet requires. Likewise, a jet-setter or commitment phobic billionaire. The exception to this rule, of course, is if the dog exists to purposely create turmoil in your characters’ lives. Again, though, make sure there’s a realistic reason for the dog to exist. In Billionaire’s Matchmaker, Charlie’s crazy temperament works because 1) Nicholas Bonaparte didn’t select him personally, and 2) his crazy behavior is well explained by the fourth novella. (Hint: It has to do with Nicholas’ backstory.)”

Shirley Jump believes we all need to do our research!

“Not all writers own the types of dogs they put in their stories. That means the writer need to do some research—and real-world research is awesome for writing dogs into stories. Certain types of dogs are more hyper than others, some are more standoffish, some are quiet and shy. If you want a dog to do a trick in your book, then be sure it’s something that kind of dog can do or would do. My dog, for example, is a Havanese, and that breed refuses to play fetch. Having a Havanese do something like that wouldn’t work in a book. Know what makes a dog tick—does the breed you are featuring like to have his head scratched or his belly rubbed? Is he more likely to chase a squirrel or lay by the fireplace? If you don’t own that breed, visit a friend or a local animal shelter and grab some interactive time! Make notes of the type of bark the dog has, how the fur feels, what the dog looks like when he runs, sits, jumps, etc. The more realism you can add, the more of a character the dog will become.”

Jackie Braun’s advice is to not let the dog take over the story!

“When a pet is an integral part of the story, writers have to take care not to let it take over. Dogs and cats, not to mention puppies and kittens, can be adorable. But readers, even those who are pet lovers, want to know what’s going on between your hero and heroine. Adding in a little four-legged diversion is fine, especially if it helps set the tone or aids in moving the story forward. But including cute pets in a scene for no discernible reason can become annoying. Even more problematic, it can throw off the pacing.

So, if you’re not sure whether the pet is adding to a scene or stealing it, ask yourself this question: What does the pet do to enhance this scene? If the answer is nothing, then leave it out or at least marginalize it to a passing reference.”

We had a great time writing THE BILLIONAIRE’S MATCHMAKER. We all fell in love with fictional Charlie. We think you will too, mostly because we were true to the breed, gave the dog a job, chose a dog that fit our characters and story and – much as we loved Charlie – we didn’t let him take over the story!

We’d love to hear your take on dogs in stories!

Jen's note: Entangled Publishing sent me The Billionaire's Matchmaker to read (FTC disclosure: I was not otherwise compensated for this post), and the collaborating authors of that work put this collaborative post together for your pleasure! If this post has piqued your interest in reading The Billionaire's Matchmaker, you can get it here on Amazon:

Two lovely benefactors have offered to match donations the Doberman Assistance Network receives through the end of the year, up to $1000!  This donation is tax-deductible, and can be made either online (via Paypal on the DAN website) or via mail at this address:

No amount is too small, especially with the caseload the Doberman Assistance Network handles. The Dobermans thank you!
Posted by Jen at 8:29 PM 3 comments

Tuesday's Tails: Freda has found a home, others still looking!

Good news!  Freda, who I posted about back in September, and mentioned again in November? Well, Freda has gone home for the holidays! A member on Doberman Talk posted in the rescue section that they brought home two (!) seniors from Doberman Rescue Unlimited, and Freda was one of the names mentioned. I thought "Hmmm, that sounds familiar" and "Hmm, she looks familiar" and I was right! Congratulations to Freda and her new family!

A collection of mostly unrelated thoughts, some dog included

So, as it turns out, to get a fortuneteller's license in my town, you have to not only take some test they come up with (which I'd do just to see it, really, if it didn't cost too much) and also be bonded for something like $5000. Which I don't know what costs the individual, having never been bonded. So that's a wash. But when I go to renew Elka's license, I'll ask if you still need the fortuneteller's license if you're going to be doing strictly for fun fortunetelling online. Or will that blow my cover? Hrm. I don't want to be breaking the law with illicit fortunetelling, to be sure.

Back in October, I was approached by EzyDog to check out one of their products, the Cujo leash. Intrigued by the design and always willing to try new things I said "yes please!" and "send one on over!"

I chose the 25 inch Cujo shock absorbing leash, as that is (in the product description) the recommended length for medium to large sized dogs. I also chose red, because that's Elka's color!

Donations made to Special Needs Dobermans between December 15 (today) and December 31 will be matched dollar for dollar, so long as the words "Make Santa Pay!" are included in the donation communication.

Share this far and wide! Special Needs Dobermans helps many, many dobermans throughout the year. They are not for profit, and everything they can, they give to the dogs.

Help Ice find a home for the holidays!

As you might assume, the Doberman Assistance Network Christmas Raffle has many more prizes now. You might be surprised by the quality and quantify of prizes, though! Remember, it's only $5 per ticket, payable by check, info in the photo immediately after this sentence.

So, Cartoonize My Pet is a really fun website, if you wondered. And, since Elka was accused at least once of being a reindeer already, I thought she'd be happier I put horns on cartoon her rather than real her. 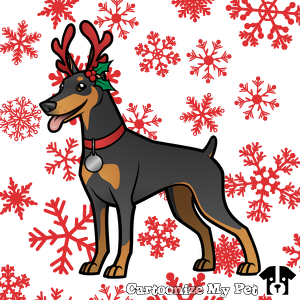 You see the resemblance, right?

Cheyenne, in Texas, looking for a home

This pretty girl is Cheyenne, though I guess her original name was "Soda", because she knows that one. Either name is kind of fun, isn't it?

Every year, the Doberman Assistance Network does a raffle. Tickets are $5 each, payable by check or money order. The prizes...well, it's Twelve Days of Christmas Style. So, on the first day of the DAN Christmas Raffle (yesterday), the following image is what the "prize pack" was:

Good luck if you enter! Even if you don't, spread the word. DAN helps Dobermans, it's the whole point, and it's a shame just how many of them need helping.

It's Cyber Monday or as I like to call it, ALMOST CHRISTMAS SO BUY STUFF, so I might as well get on the bandwagon. I figured I'd "showcase" some items that benefit dog rescue.

First up is Christy Cole Rescue jewelry on Etsy. She donates 100% of the profits to dog rescue. She has Doberman themed stuff! Other breeds too. And the prices are reasonable, not something you see every time. 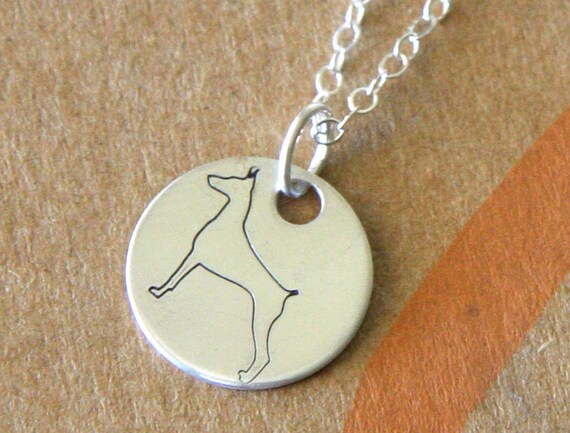