Want to play a game? Tug!

Elka's favorite game is Tug.  She will try to play it with any toy ever, from a rope (you know, marketed as a tug toy) to Gumby (who puts up with it), to a tennis ball (which fits almost entirely into her mouth and doesn't work).

Tug is a fun thing for her, and can be for me too, though the game has to have rules, as one might guess.  There are some people who in fact say that you should never play with your dog, as it can mess up the "pack hierarchy" or make your dog aggressive.  I don't really buy into the whole "pack" notion; dogs know the difference between people and dogs.  A whole bunch of dogs together might make up a pack and have rules within it as such, but if you've got people and an "only dog" in a household, I don't think it applies.

Aggressiveness is a can of worms I don't really want to get into, or at least not when we're talking about a fun game! Suffice to say, if your dog has aggressive tendencies in the first place, or is very very possessive with toys, don't play tug.  There are problems already in place and you don't need to ask for more.  But if you have a well-balanced dog who lets you give and take toys happily?  Tug away! 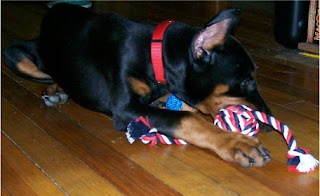 Now, in one of the dog books I read, the author specifically recommends waiting until after your dog, if it's a puppy, is done teething and has its grownup teeth in before you play Tug.  At that point, the jaw structure and such is strong enough to take that kind of exercise.  This is the only place I saw it, and I don't remember what book it was, so the jury is out on that, I suppose, but I didn't want it to go unsaid.

The first step of Tug is, obviously, the toy.  Pretty much any dog toy section in any store has ropes of varying lengths with varying knots, all for this purpose.  When you hold this toy out to your dog, she will want to grab it, or hopefully gently take it in her mouth.  No toy if you grab, that's Rule #1.  I used toys, not treats, to teach Elka the "Take it" command.  I held a rope (or a Gumby) out to her and said "take it!"  When she did, I would let go and praise her.  Typically, Elka will then shove the toy back at my hand, because she wants to tug.

Step 1: Take it.  No grabbing.
Step 2:  Hold onto the toy as firmly as you can, but let your arm go limp as your dog shakes the heck out of it.  Elka, much like she wants to play tug with every toy, will also shake every toy.  She'll pull, I'll pull back, she'll pull, etc.  Frequently, she gets very into it, and growls as we go.  At this point, and this is optional, I start talking to her, asking her if she's a vicious killer (and no, she does not growl on command.  Only in play, or if she thinks a home invasion is imminent).  The growling is part of the fun, and can sound very fierce indeed.
Step 3: Drop it.  No grabbing.

I don't remember the exact steps I used to teach Elka "Drop it".  It typically involves putting something in my hand as opposed to immediately dropping whatever happens to be in her mouth, and I'm lucky in that while she's inappropriately chewed a number of things, Elka doesn't actually seem to ingest those things.  One way to get the "Drop" is to have something better on hand, that they will trade for.  If your dog has a toy, but you have a hot dog, and offer the hot dog while saying "Drop it", it will be reinforced.  The trading method is a simple one, provided you have treats on hand, and your dog doesn't already have something that they value more.  You can also wait your dog out, though this requires more patience; you each hold an end, you unmoving and clearly not-playing, until your dog decides this isn't fun anymore.

Frequently, especially while playing Tug, I reinforce "Drop it" immediately with "Take it" and give the toy back. 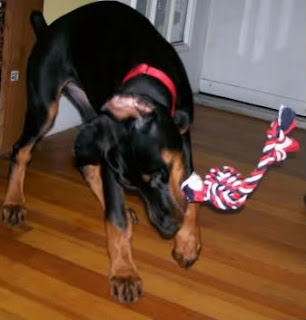 Elka will take that opportunity to dance around in a circle, shaking that toy for all its worth.  Because I almost always give the toys back in this manner, Elka has never been possessive of any of them.  I can take things out of her mouth because I want to (heck, I can open her mouth and look around in there if I want to), and if she wins at tug, she will almost always try to put the toy back in my hand (or the hand of anybody else who's playing with her) to keep going.  She doesn't want to win; she wants to play. 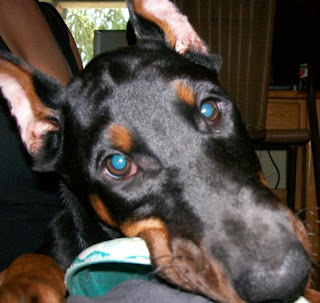 Email ThisBlogThis!Share to TwitterShare to FacebookShare to Pinterest
Labels: drop it, Games, take it