On Sunday night/Monday morning I had the unfortunate experience of having quicked Elka's nail while trimming it. Other than Wednesday, it's rather become this week's theme, unfortunately. That's my life, no shortage of inspiration, I guess!

Part of the reason I've been talking about what seems like such a minor thing all week is the fact that her nail bled for so long. It was unsettling, to say in the least. I didn't think that it was life threatening, as I knew that Elka was a carrier for vonWillebrand's disease, but neither affected nor clinically affected. And then I realized that it was time to talk about vWD. 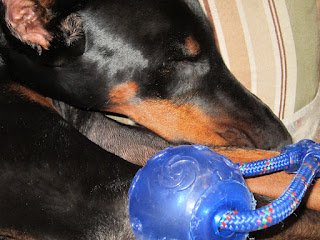 von Willebrand's disease is, in short, a clotting disorder in dogs. VetGen has a very good page on it, with a lot of information gathered in one place. Things like this are valuable, because not everybody has the wherewithal or the know how to winnow scraps of information out of the corners of the Internet.

There are two tests for vWD that can be carried out; the first is the "snap test", or , which is not a genetic test, but rather tests your dog's vWD factor that day. The blood's ability to clot varies on several factors that I know nothing about, and that test can assess in the moment whether there will be a difficulty in your dog's blood clotting during a surgical procedure. VetGen also has a genetic test, which will definitively state what your dog's genetic vonWillebrand's Disease type I status is: clear, carrier, or affected. According to VetGen, so far as Dobermans go, 25% (of the ones tested) are Clear, 49% are Carrier, 26% are Affected.

Clear obviously means that the dog does not carry a vonWillebrand's disease gene in any way. Carrier means that one of your dog's parents carried the gene, and thus the puppies in the litter (if the carrier was bred to a clear) have one half of the gene, but not the other. Affected means that your dog has vWD, but there are two parts to that: affected, and clinically affected. A clinically affected dog ought to have measures taken in order to ensure that she does not bleed excessively in the occasional of trauma or surgery. On VetInfo.com, two things that they suggest are having plasma on hand for a transfusion and cryoprecipitate which is a "frozen blood product prepared from plasma" according to the Wikipedia article. At least one more thing that goes without saying is not to administer a medication that's potentially a blood thinner, such as aspirin.

Now, "clinically affected" means that the Doberman has both "halves" of the gene, and displays excessive bleeding symptoms, be it from surgery, trauma, or teething. An "affected" Doberman, though, carries both "halves" of the gene but may never present symptoms. This is hearsay, not clinical research that I've conducted, but I tend to trust the word of mouth from "my" Doberman people.

With some of the issues that Dobermans have, vonWillebrand's disease is not the most threatening of them; that one is Dilated Cardiomyopathy, which I'll discuss another time. It is not considered unethical in most circles to breed to a carrier; having a litter of carrier will not clinically affect them. vWD is one of those topics that a breeder who is less than ethical might dwell upon in order to cloud other issues in a buyer's mind; the vWD test is comparably cheap, at $75, to other health tests, and thus very accessible.

Edited to add: I revisited the VetGen page of tests by breed, and the VetGen vWD test is in fact $140. I apologize for providing incorrect information here. 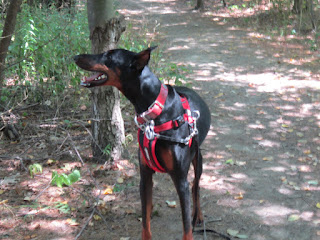