When is a breeder a puppy mill?

Too frequently in dog news, there are stories that hurt my heart.

There are the sorts kinds of things that bring the AKC under fire, as the New York Times reported last week. The AKC evidently has a total of 9 people for the entire country, to carry out inspections of this sort. And that's only if somebody calls them in, I daresay. The AKC is a breed registry, and a pedigree database. That's really it. They claim to be an animal welfare agency, and I know that they are a registered not for profit, but what is the point at which welfare is called into question? How many puppies makes a puppy mill? How much poop needs to pile up before conditions are  considered bad enough? How many cages, stacked or otherwise? 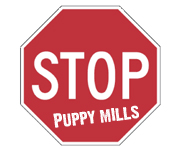 Well, there's a kennel in Fauquier County, Virginia who recently had a pretty abominable inspection. Even so, the owner, Irina Barrett, was not required to surrender her dogs. She might not. She has Dobermans, which is what brought the story under my nose, but also Great Danes, Boxers, and French Bulldogs. Many of the dogs in her care were in plastic crates and unable to get out of their own filth. None had access to water. I don't think available food was mentioned in any of the articles I've read either.

According to FauquierNow.com, there was a preliminary hearing that was not about animal abuse, but rather land use. Apparently Ms. Barrett's kennel operation was a zoning offense, and there is debate as to whether she should be granted a license. If nothing else, her neighbors complain about hearing 16-20 barking dogs of an evening. Based on the reports of a court-appointed county inspector, I feel Ms. Barrett should be restricted from owning animals ever again, but they haven't asked me. Among other things, Ms. Barrett has had two litters starve to death (I'm not sure which breed they were, but really, it doesn't matter), which is unconscionable.

Wtop.com has a many page article that is very in depth on the topic, in which Ms. Barrett claims that she is not a puppy mill. Looking information from Ms. Barrett's various breed sites, I have to wonder what, exactly, she considers a puppy to be. Combing through the Doberman site, one can get a tally of 26 litters, totally 180 puppies, between 2006 and 2012. And that's just the Dobermans, folks. For the Great Danes, it's 10 litters and 66 puppies. According to the Wtop.com article, she has Boxers as well.

Just having a single Doberman puppy about did me (and my fiance and my house) in. 26 litters? Some of which were on the ground at the same time? How do you pay enough attention to each puppy? How to you keep those puppies from chewing your house apart? How do you clean up after that many puppies? Socialize them, vet them, care for their cropped ears....the list goes on. If you have employees, okay fine, but she doesn't. Again, by her own admission, she cannot hire employees to work at the property because the conditions are too bad.. But then there's the responsibilities that are the earmarks of a good breeder: would Ms. Barrett be able to care and provide for any of those dogs, should the owners return them? Would Ms. Barrett have the time to give her puppies' owners the support they might need, with regards to ear care questions, health questions, etc. Considering the dogs most recently found in her care were in dank, waste riddled conditions, some of them emaciated and covered in sores, many with various kinds of worms, I somehow doubt it.

Ms. Barrett surrendered twelve dogs after her inspection, by the way. But her application for the zoning license reflects that she wants to house 20 Dobermans and 6 Great Danes. I cannot countenance owning twenty six personal dogs. Those litters that she told the inspector starved to death? It was because she was too busy to hand raise them, since she had so many dogs. I opened this post saying I was heartsick, but I keep going back to that detail, and it makes me want to throw up. And cry. And hug Elka. The inspector's report is embedded in the wtop.com article, and reflects that she had something like fifty dogs in her care at the time of the inspection.

Again, she was not served with a compliance notice, and not required to surrender any dogs.

The hearing was delayed until March 7, pending review. My understanding is that by the initial hearing on February 7, the committee was receiving a number of calls and something like 400 emails from all over the country, decrying the conditions in Ms. Barrett's facility. I do hope that means she isn't granted a permit.

It would be nice if the AKC would in fact step in and do something when stories like this develop, wouldn't it? It would lend credibility to the claim that they are an "animal welfare organization", wouldn't it?

The twelve dogs that Ms. Barrett released are in the Middleburg, VA animal shelter. Should you be inclined to make a donation for their care, the information is