We got new furniture!

We got new couches. And a new coffee table. Elka, to say in the least, is dismayed.

See, first, we emptied the living room. Took the furniture out. The whole nine. Poor princess had nowhere to lay, and was very disgruntled the entire time. 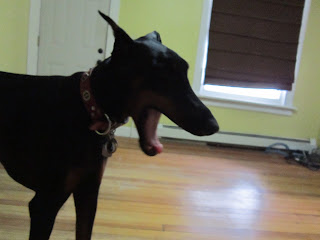 (please ignore our unsightly Internet wires. They were in a table that is no longer there)


Then, we had her gated in the kitchen while we took the door off of the frame, so the furniture could fit inside in the first place. She whined and yodeled the entire time she was gated in the kitchen and the delivery guys eased the red leather couch through the door. The loveseat, I'm happy to say, fit rather easily, as did the new coffee table when it got here (which they called a cocktail table? I'm not sure what the distinction is supposed to be?).

Then we released the hound. 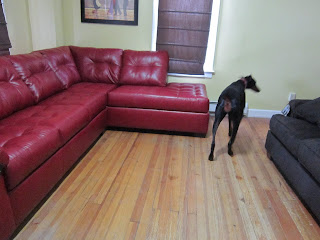 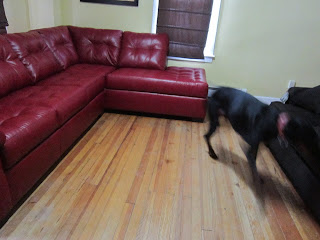 We never really had a big chair here before... 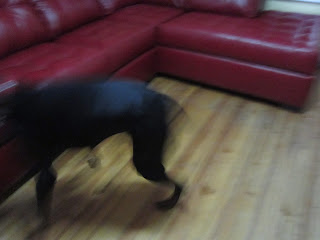 OH GOD DID IT MOVE?! 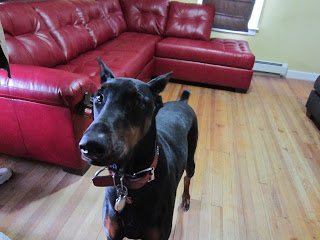 I sat on the loveseat before they brought the table in (actually, they forgot the table and had to go back to the warehouse for it), and Elka reluctantly docked. 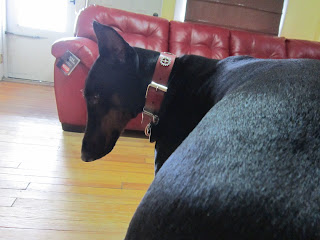 Then, under duress, she got up on the loveseat, while looking at the red couch and looking away, then yawning, then tongue flicking. All lovely canine body language examples of calming signals or appeasement gestures. 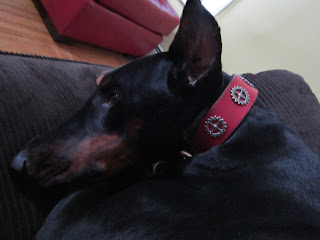 Then she yodeled some more as the table arrived, and I signed for the delivery, and we turned her loose again. 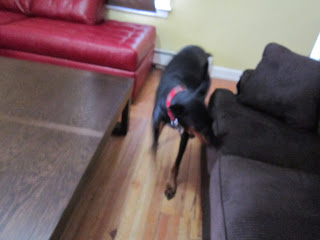 She's only gotten on the red leather couch (hitherto known as "the blood couch", for it's distinctive color. Don't worry, it's a good thing. Nobody bled on it) a couple of times, hesitantly. She didn't spend much time there, just tried to cram herself as much on top of the person there as she could, before changing her mind and awkwardly leaping off. This might work in our favor, really, though it's kind of funny she's so awkward about it. The car seats are leather, so it isn't an entirely new surface for her.

Of course, the walls in this room are yellow, so when it's spring and we can do things like have the windows open, we intend to repaint. New shades are also necessary. We could probably use some bookshelves, or twelve, but needn't wait until spring for that, at least.