The other day, Elka and I were playing with Gumby. Maybe we'd just come in from a potty trip, and it was celebratory tug? I don't remember. Regardless. When we play tug, I like getting Elka all riled up and snarling like she really means it, and then having her "drop it" and then either Down, or Heel. My fiancé hadn't seen this mystical "heel" happen, and had us repeat it several times.

Elka will go from facing me into a heel pretty well at this point, off leash in the house, and also in the yard. If she's a bit crooked, I say "Excuse me, straight" and she straightens herself out in relation to my heel, and sits. I can also say "Front", and she'll swing her hindquarters around and sit in front of me. But how did we do it? 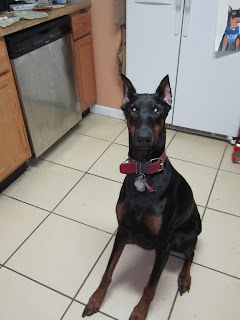 
Like many of Elka's "behaviors in motion", a clicker and cheese were instrumental in their implementation. "Heel" and "straight" in this manner happened originally on our walks, most notably when we were waiting at a corner to cross the street. If Elka is in an automatic sit at my heel, I'm free to look both ways for cars and things without worrying about what it is she's doing. Our cue after I look is "Okay, cross the street", so that she's entirely clear that she's waiting on my cue, not just whenever she feels like moving. "Okay" was probably not the most reliable of release words to have picked, but I didn't think about that when I did it, so what's done is done.

The clicker really is fantastic for getting exact behaviors, and I can't really emphasize this enough (though sometimes I forget to mention it). I can flex my thumb far more quickly than I can say "Yes!" or "Good girl!" or whatever other inane human speak comes out of my mouth, and Elka certainly whips her head right around for the clicker, while sometimes she'll only flick an ear for my chatter. 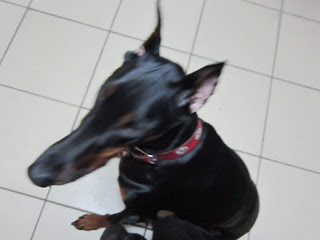 So, Heel. Taught first in motion. If she's standing in the correct "vector", as it were, while either walking or still, click and treat. Then while walking, click and treat. Then I would count steps. First just three before the click, to keep her attention. Then five, then ten. Sometimes it's "Let's get to the next driveway" or "once we're at that telephone pole". Expand your criteria gradually, but reasonably. 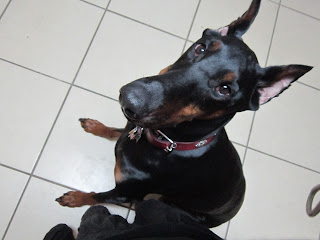 "Front" is kind of an obedience recall cue, I think. Maybe it's what people hope for when the dog retrieves a dumbbell over jumps? I don't know exactly; I just kind of cannibalize words from all of the dog venues I read about ("on by" is a sled dog cue I read in Gary Paulsen, as an example). For my purposes, it's Elka in a sit, fairly close (though not paws on my feet close), looking up at me. Since I've kept that one spare and dynamic, she isn't bored or distracted with it. If she's in "Front", something else is going to happen next and soon! It might be tug, it might be another cue, it might be a treat, it might be her squeaky toy.

Keeping Elka interested in me and what I might do next is a training strategy I don't capitalize on nearly enough. We grow comfortable and complacent sometimes, I daresay.