So, I finally did it.

I guess it was a matter of time.

Three years later, and I cut one of Elka's nails too short while trimming. Colloquially referred to as having "quicked" my dog. Let me tell you, it isn't a fun time.

She made a tiny little whine noise and pulled her foot away. She'd already been doing some foot pulling, which is frustrating when you're wielding little bladed things and trying to avoid the very thing that I realized I'd done. 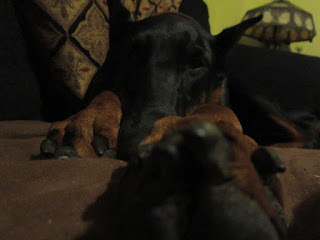 I sent Elka to the kitchen, where she promptly went, living little blood drops on the floor as she went. I'd heard that cornstarch could help in situations like this (it's not like I had a styptic pencil) and grabbed that out of the cupboard, and the roll of paper towels from the counter. The first dabbing of cornstarch didn't do anything other than make crayon-red paste that the blood went through further. I'd heard that cornstarch would help, but never heard a specific way in which to enact this strategy. Putting her paw into the little plate sure wasn't useful.

I held her paw up, and let her lick it for a little while, which also seemed to be going nowhere. I held her paw and didn't let her lick it. I pinched up some more cornstarch and dabbed it onto the nail, watched it bleed through, dabbed it some more, watched it bleed through, dabbed some more...and waited. It seemed to have stopped? Elka licked it. It started again. She licked it some more, and then chattered her teeth and smacked her lips from the cornstarch, which would have been funny if there wasn't dog blood on my hands and on the floor, and cornstarch on her head, on my clothes, and all over the floor as well. 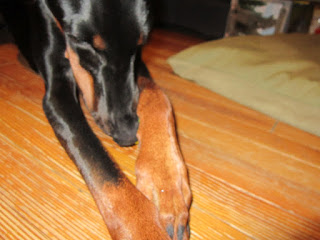 A picture from less bloody times.

I stopped her from licking it again, and tried the cornstarch again, dabbing it on as before (have you ever noticed before that cornstarch squeaks?) and then wrapping a paper towel around her pawn and holding it between my hands. I had her laying down, so I held it up a little, thinking that would probably help too. We sat together like that on the floor for ten mintes more (she licked her leg and my hand) and then I pulled the paper towels back. Was it done?

Again with the crayon red paste. I wiped it from between her toes carefully, and looked at the nail. Was it done? It looked done. I waited, and didn't see more blood well up. I got a towel and put it on the couch, and put Elka on the towel, and went back to clean up the kitchen floor. I came back, and she'd licked it enough that it was bleeding again, but only a little. Joy. You'd think "Okay, in the wild, a dog would lick something to make it better, right?" I did think that. And then I thought of Invader Zim: "Worse, or better?" Worse. More blood.

So we got out a sock. First round was sock with a paper towel in it. Poorly conceived, I know. The paper towel didn't stay positioned, and seeped through. Second round, though, I got smart. Sanitary napkin, wrapped in place with gauze, with a sock over it. Elka isn't happy, and I'm sure it hurts, which makes me feel really guilty. But I need to get her to leave it alone long enough to do its thing. I imagine it'll be better by tomorrow. 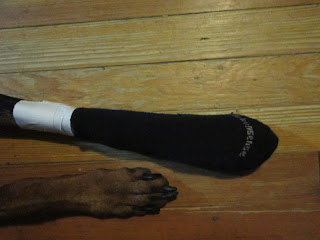 Common wisdom is that walking your dog on pavement wears their nails down enough, but I frequently feel that Elka's nails are just too long. A lot of Doberman owners on Doberman Talk use a dremel tool on their dog's nails, and with good effect (from my vantage point, anyway). A bonus of dremelling is that you can go little by little, and have far less chance of getting to the quick. Disadvantages are noise, heat from friction, and nail dust. 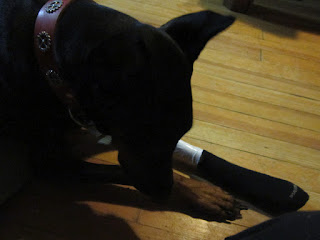