At the park, a guy was talking on his cell phone on one of the benches. Elka was staring at him, for whatever reason.  Maybe she thought he had food. Maybe she wondered who he was talking to. I'm not really sure; she stares at us when we're on the phone as well, or on a headset with somebody, and if it's somebody she knows, she seems confused that she can't find them. 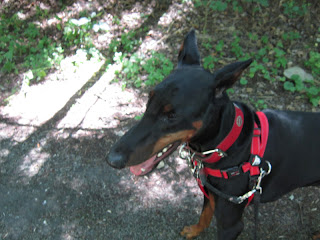 But, said Cellphone Talker looked up at Elka and grew visibly uncomfortable. I just smiled, and he said "Wow. That's a big scary dog. What kind of dog is that?" 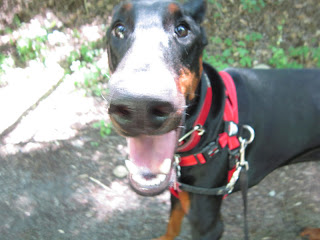 When I have a conversation like that with a person, I am amused, I'm not going to lie. But really, I have to wonder about that person's prior dog experience. Had they been knocked over by big dogs as a child and avoided dogs since? Had they been attacked? Had they only interacted with ill trained dogs and owners who thought it was funny?  Nothing insulting was said, so it's not like I could really be indignant. I just wonder.