What's that you say? A ball guaranteed against destruction by your dog's tender mercies?  Yes, my friends, that is the Unbreakoball!

Considering all of the tennis balls we've gone through, I was more than willing to try something that was also a portmanteau.  That it's made in the USA is another definite bonus. 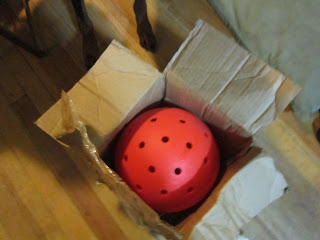 Based on the web site's recommendations, I went with the 10 inch "Big Daddy" size (I didn't realize just how wrong that sounded until I just now typed it. Apologies.) It's the size of a basketball. It's hard plastic, with holes in it (as you can see). It's also, apparently, terrifying. 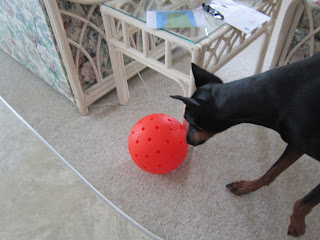 On one hand, I do get a kick out of watching Elka interact with it, because she pushes it around with her open mouth, barking. And she isn't really a recreational barker. So that's got it's own appeal. After awhile, though, you just have to wonder what it is about this ball that's given her The Fear. She was interested enough when I was opening the box, and when I got it out, and then it was all over. 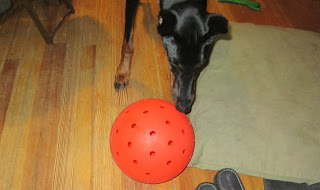 Who knows, maybe it would make a good outdoor toy. She could push it around the yard, barking, and fit right in with all the other neighbor dogs who bark mysteriously. 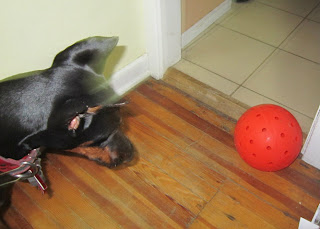 I could also get the smaller size, to try that one out, though I guess if I were to get the smaller size for a bigger dog than they recommend, the replacement guarantee probably wouldn't be in effect. It's worth a shot, anyway. As is, it's  a little bit ridiculous. Also, in the photo above, how did I get that ghost dog effect? It looks like Elka's head is see through. Bizarre.