Elka uses her paws a lot.  I don't know if it's a her thing, or a Doberman thing (Doberman owners, feel free to chime in!), but it's a behavioral quirk that I've been inclined to cash in on.  Elka will use her paws to hold a Kong (or her Monster Mouth) still to get what's inside.

She will use her paws to fish under the coffee table or couch (often unsuccessfully) for a toy that's bounced there.  And because she would paw at us so much, I gave a bunch of those behaviors names, and now she'll do them on cue and not every time she's playing or wants attention. 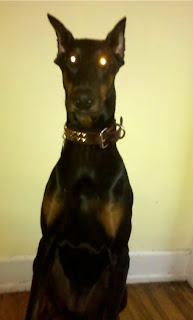 The first trick of this sort that we taught Elka is theoretically the most basic one: Paw.  As in, "give me a paw."  Sometimes we said it as we caught a paw that she slapped on us, other times I had her start with a Sit (see, it always starts with Sit!), and then picked up her paw and held it loosely for a second, saying "Paw".  She's a smart cookie, our Elka, and after very few repetitions (it seemed) she was getting it.  We said "Paw",  and held out a right hand, she gave a right paw.  Then I upped the ante and did the same thing with the left.  Now, you hold out a left hand, and frequently, you'll get the left paw.  It isn't 100%, and happens best if the right paw has already been held.  If you offer your left hand first, and Elka offers her right paw, "no, the other one" is typically sufficient to clue her in. 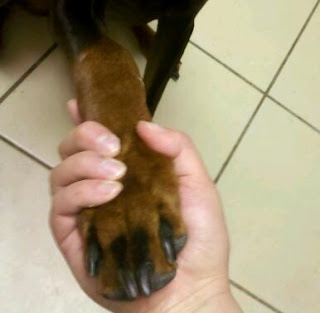 (as a side note, I'm partial to the black marks on Elka's toes, which are very apparent in this picture.  They're referred to as "pencil marks", in the lingo, and can be a feature that loses points in Conformation showing).
After Paw, I thought it would be a lot of fun to change the behavior just a little bit, to High Five.  Starting with my right hand, I held it out, palm facing Elka (Take note: this "stop sign" style hand signal is frequently the signal for "Stay") and said "paw".  She didn't lift quite high enough for the first couple go-rounds, and still occasionally misses, but caught on to this quite well.  After Elka acclimated to the difference in my hand between Paw and the intended new command, I added the words, "High Five".  She will make good palm connection with what seems to be pretty nice enthusiasm when I say "High Five!" in an excited tone.  After that, I added the left paw as well.  And then, just to go for the gold, I added "Pattycake", which is right-left-right-left, when executed properly, minus the customary individual hand claps in the middle.  Elka seems to genuinely be humoring me when we do Pattycake, but it was a big hit at Christmas. 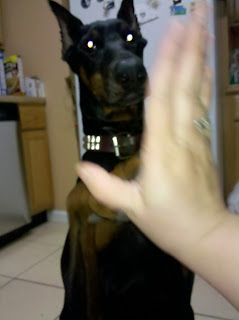 This last one may or may not be controversial, and the picture is quite bad, but representational.  1. It's difficult to take pictures with one's left hand, if one is right handed, and 2. it is a constant frustration to me that digital cameras have so much lag between the button press and the actual picture taking; there are so many nice shots that "could have been", were the media a bit more instant.  The price of progress, I guess.
That said, our current paw command of high-percentage reliability is Testify!  Originally, I was teaching Elka to turn her head and put her paw to her face when I said "Elka, are you sad?"  I guess Elka isn't typically sad, though, or at least, she's sad enough to whine but not cover her face with her paw.  So, she would frequently quasi-offer the behavior by throwing her left paw in the air.  I watched her do it one day (she'll do it while you're eating, mostly, so that she gets rewarded) and thought "gee, she looks like she's testifyin' to the Holy Spirit."  So, now I say "Elka, are you full of the Holy Spirit?  Testify!" And she'll throw her left paw in the air. 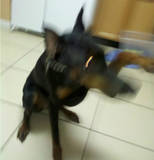 Getting your dog used to you handling her paws is useful when it comes to things like nail clippings, checking them after walks, and wiping them off after a muddy trip outside.  Having your dog paw things on cue can be useful if you want your dog to do things like turn off lights (on my list), close kitchen cabinets or doors, that kind of thing.  Are Paw, High Five, and Testify "necessary" commands?  No.  But it's nice to have fun once in awhile, isn't it?
Posted by Jen at 10:59 PM