Heidi the Doberman ~ decision has been made

I was happy to open my inbox today and see, via the Daily Tribune in Royal Oak, Michigan, that the verdict was in on Heidi the Doberman: she may remain with her family, but must be muzzled if she is in a public place. Heidi's owner, with no prior criminal record, pled "no contest" to the biting charge, and received a delayed sentence of six months, which means


At the end of the six months, if Spalding [Heidi's owner] has not committed any other criminal violations, including violations of the city's dog ordinance, she will be allowed to withdraw her  plea and the case will be dismissed. 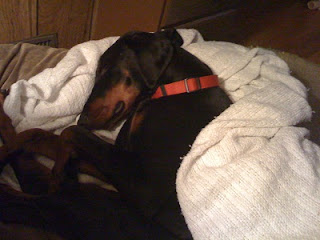 I'm unclear on whether this means Heidi will need to wear a muzzle in public for the rest of her life. Really, the outcome could have been worse, considering her owners feared that euthanasia was going to be an option.


Of course, a dog might still break somebody's  nose wearing  a muzzle, and Lennox (the American Bulldog mix) in Northern Ireland was wearing a muzzle when he knocked down a dog warden, precipitating his removal from home and subsequent court battles that, I think, are still going on. Last I knew, that was supposed to go to court again at the end of January, but when I look, the news sources have not updated on the matter.

A muzzle is an interesting thing. There are at least two kinds that come to my mind; a cloth one and a basket style. The basket style, be it leather or wire, still allows the dog to pant, eat, and drink. It's the kind that racing greyhounds wear, and are sometimes utilized in Schutzhund (or, they're for sale on all those equipment websites, anyway). A cloth muzzle is, I think, typically used more often in emergency situations, so that a dog does not bite while fearful and in pain and receiving medical care.

A muzzle doesn't have to be something that Heidi has to be unhappy wearing, either. Her family ought to acclimate her to it, over a period of days and perhaps weeks, making the muzzle a happy! Fun! thing! that involves tasty treats and only positive experiences. In my readings, people have suggested, while acclimating a dog to a muzzle, to put  peanut butter (or something equally lickable) in it so that the dog makes her own decision to insert her face. Then, as comfort familiarity grows, the straps are brought into play, moved around at first, then held, then buckled, for increasing amounts of time, until the dog is happily wearing the muzzle with no discomfort.

I'm not certain Heidi's owners are even thinking of the training aspect of that just yet. If it were me, and Elka, I would be sitting at home with her on the couch, holding her and thanking God that not only was my dog's life not in danger, but she was still my dog, at home with me.