I had the honor of being approached by a publicist at Harlequin to read and review the book, A Dog Named Boo: How One Dog and One Woman Rescued Each Other, and the Lives They Transformed Along the Way, by Lisa J. Edwards. Intrigued, both because I'm a sucker for dog books and because I thought Harlequin only published romance novels, I accepted. I'm glad that I did!

To kick off Lisa Edwards' blog tour, I've read and reviewed A Dog Named Boo, and have copies for giveaway! 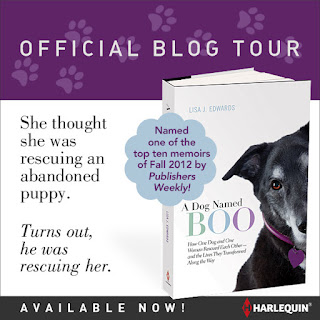 There is a genre of books in which people rescue or otherwise acquire dogs, and then relate in wonderment the changes that these dogs wrought in their lives. I didn't know this oh, three years ago. I'm well-versed in this genre nowadays, and am really rather fond of it! I say time and again the things that I've learned having Elka, and the small ways that I've changed. It's true. Dogs change us. For the better.

Edwards discusses picking Boo out (on Halloween, at a pet store, where his litter had been unceremoniously dumped). She talked about how her husband was a hard sell, but finally said "Okay, fine, but he's your dog." She talked about how little Boo was a little.....off. How he didn't pick things up all that quickly, how housetraining was a Herculean effort that almost resulted in her finding a different home for him to make peace with her husband. And then the discovery: that Boo, in fact, had cerebellar hypoplasia, something I'd never heard of before (nor had Edwards). From the book (page 111): "In humans, the symptoms of cerebella hypoplasia can include delayed development, mental retardation, ataxia (por balance), seizures, hearing impairment, reduce muscle tone, and more. Symptoms in dogs, though not exactly the same, can be very similar." So, Rather than Boo being stubborn and Edwards being "bad" at dog training, Boo was developmentally delayed, and Edwards was actually rather accomplished! I was sad to see that this was not a huge confidence boost for her out of the gate, but as everything, it was a journey.

Edward spends time talking about her family, and the regrets and traumas there. She spends a lot of time before Boo's diagnosis training him with an eye to be a service dog for her brother, Chuck, who has Lou Gehrig's disease. Chuck passed without ever knowing that his sister was making this effort, and ultimately, Boo would not quite have worked out in that role.

What Boo does excel in? Animal Assisted Education and Animal Assisted Therapy visits. Between Boo and Dante (a Shepherd-Doberman mix), Lisa has two dogs with very different personalities who she takes on visits to classrooms of children learning about dogs and learning to read. They go to classrooms full of kids with developmental disabilities who are learning about dogs and learning to read. They go to nursing homes. Dante is a consummate clown, an occasional whirlwind on a leash, a sharp guy (it's hard to say whether this comes from the Doberman or the Shepherd, but I did love reading about Dante)! Boo has his troubles physically with laying down, and giving a paw, but he's a laid back little dude. He has gravitas, and can handle a tumultuous room, all kinds of hands on him, people screaming and dropping things. It's clear that Edwards loves these visits and this work, and it was a joy to read about it, and the difference that dogs can make in peoples' lives with just these short visits.

Today, Edwards has Three Dogs Training in Putnam County, NY. I wish she was closer to me, really, because she seems as though she would be a good person to train with. In her journey with Boo (and Porthos, a dog added to the household in the course of the book) she realizes fully that she does not buy into the "old" methods of dog training, the "you have to show him who's boss" the "he's just being stubborn", the "you have to make him." She believes that dogs communicate with us, and it's our job to interpret that as we teach them and work with them. She says, on page 236, ''I knew from that moment on, I would dance naked (not literally) around the bonfires of anthropomorphizing. I am human, and this is how I understand the world around me, and because my dogs feel the emotions I do, I will use my experience to attempt to understand the emotional state of the animal."

As an added bonus, I was sent a copy to review, and a copy to give away. But, what the heck, I'll give both away! I really liked this book, and I want more people to read it. Per usual, Elka will pick the winners. To enter, please comment below by Monday, October 8, and tell me what your dog has taught you.