Dilated Cardiomyopathy (DCM) is the bogeyman in Dobermans nowadays. There is no modern bloodline that is free of it. There is a $65 genetic test that you can get from VetGen to see if your dog is a carrier of that specific gene, but the problem is, they've only identified one gene. So dogs that test "clear" may still die of DCM.

It's a scary thing to think of. And currently, with Elka at the tender age of 3, I'm clinging to the notion that she'll live forever. That's how this story will go, right? 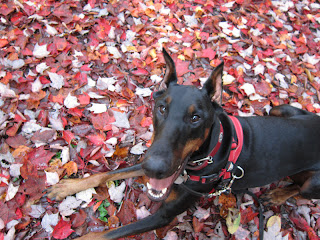 (notice how Elka found the only green in the fallen leaves?)

Dilated Cardiomyopathy "is a disease of the heart muscle that results in weakened contractions and poor pumping ability. As the disease progresses the heart chambers become enlarged, one or more valves may leak, and signs of congestive heart failure develop." Depending on the stage of the disease, a dog may not present any clinical symptoms. So, there is Occult DCM, in which a dog presents no clinical symptoms. There is Occult DCM with PVC (Premature Ventricular Contractions). Finally, there is Overt DCM, which means congestive heart failure. There is no cure for DCM; just diagnosis, and the mitigation of congestive heart failure.

Diagnosis of DCM comes in a couple of ways. There's the 24 hour Holter exam, in which a dog will wear a vest that continually monitors the heart's rhythm via ECG (electrocardiogram). A Holter is more likely than a routine Echocardiogram (which is shorter, up to 6 minutes) to detect the presence, frequency, and recurrence of PVCs.   A holter is not unique to dogs, mind you; there was a thread on Doberman Talk recently where somebody said that they were getting a holter, not their dog! There are also X-Rays, though in what I've read, the X-ray seems to be the weakest of the diagnostic tools.

(3D echocardiogram of a heart viewed from the apex. Because it's cool.)

The DCM gene, referred to as "Meurs Gene" after Dr. Kate Meurs at North Carolina State University is autosomal dominant with incomplete penetrance. The "incomplete penetrance" part means that DCM may present itself in a young dog, or it might do so later in life; there isn't a rule. As I said, dogs who tested positive for the DCM gene have lived out their lives DCM free; dogs who have tested negative for the DCM gene have dropped dead running in their backyards after having presented no symptoms. Clearly, the gene that was found is only a single piece of a complicated puzzle, and the pieces are still being looked at.

Further, a dog that has one copy of the gene is heterozygous positive; a dog with two copies is homozygous positive. Just like the head tremors, CDM in Dobermans is also referred to as "idiopathic", as the cause is not known. In what I've read, the consensus also seems to be that there is no real preventative measure to be taken. If it'll happen, it'll happen. It's a hard thing to reconcile, I'm sure, but in a way I guess it encourages one to carpe diem, as the dog does. 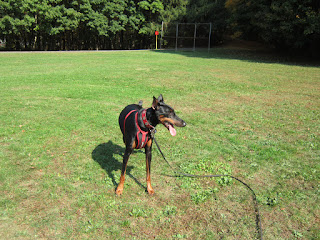 There is far more to it than this, obviously. Without getting completely scientific, with stuff that I don't really understand and haven't really read, I think I've covered the basics. Gotten our toes wet, gotten the information out there. There are resources for owners, and there are scientists and specialists gathering data and trying to help dogs. You can, in fact, see a list of Dobermans who have been tested for DCM on the North Carolina State University web site, by owner permission. I take this to mean that not all owners who tested gave permission. I recognize names when I scroll through, from current dogs shows, from Doberman Talk. At least one of the names I recognize is of a dog who has passed, and that makes me tear up and also hug Elka, who is sleeping and wonders what's my problem.

So far as treatments go, I know literally nothing about them, and I certainly hesitate to give armchair Internet advice. If your dog has DCM, I would suggest contacting a cardiac specialist. Additionally, I hear that Dr. Meurs is receptive to being emailed, and you can find her contact info on the North Carolina State University web site. Last week, Jana Rade at Dawg Business posted about a new international study on a DCM treatment that showed promise in delaying congestive heart failure and sudden death. I hope that the statistics continue to pan out, and that this treatment is truly a new hope for owners of dogs with DCM.

I didn't know any of this when we got Elka. I hadn't researched Doberman Matters so fully as I have by now; in a way, I wish I'd taken more time. Or started researching earlier. I don't regret Elka, certainly. She is the dog that I've always wanted. I do regret Elka's breeder, however, and especially the way that she answered my questions. Let it be known, people, even if you know the correct question: "What health testing was done on the sire and dam of the litter?", the correct answer is NOT "Vet checks were completed on the dogs." I wanted a healthy breed, and a healthy dog. So far, knock wood, I have a healthy dog. 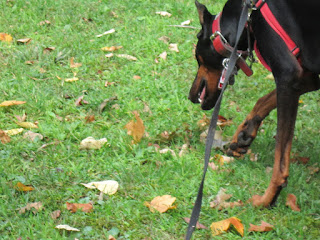