Bear, a 6 year old German Shepherd on the police force in New York city was injured while apprehending a suspect yesterday. He'll be okay, before you're too worried, but boy howdy. That does not sound like it was a fun law enforcement experience. 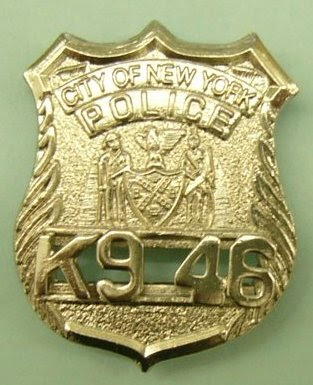 Apparently there was a fight between four women in one of the subway stations, and police showed up (as they do). One of the suspects, while being handcuffed, started resisting vigorously, and kicked Bear in the face a couple of times. He responded by taking her foot in his mouth and holding it there until his human partner completed handcuffing the suspect. As it turns out, four of his teeth were damaged, and his tongue lacerated. Bear did not break the suspect's skin, or even penetrate her shoe.

Imagine how hard that is. This lady is hurting his human partner, kicking, and screaming. Broken teeth hurt a good deal, I imagine (he's supposed to get caps for them next week). But Bear did not reply in force, did not escalate; he simply helped hold her until the other human officers got her back under control. That's a K9 officer worth his salt!
Posted by Jen at 12:00 AM