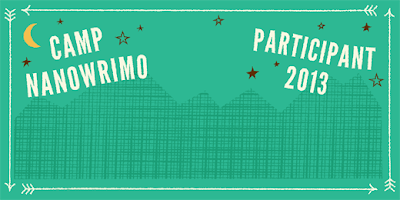 It is August now, another NaNoWriMo done until the Big One in November. This year's Camp sessions were different, because you could set your own word count goals. So, I wrote 35k in April, and 35k (well, 36 and change) in July. Put 'em together, and I need a few more chapters (still going!) and the story is done.

A lot of interesting things happened in July, in the context of my novel, The Last Song. It's set in Detroit, more or less (there's an otherworld, underworld, Alice in Wonderland sort of questing thing going on with it). Detroit ended up declaring Chapter 9 Bankruptcy, the largest municipality to have done so. It's apparently holding an auction of some of its artistic treasures, so make up for some of that 22 billion dollars.

But good things are happening in Detroit too. There's the riverfront, slowly being rebuilt, and the Riverwalk. There are businesses moving there. Previously a food desert, both a Whole Foods and a Meijer opened there. Real estate is cheap, and developers are snatching buildings up, including the abandoned Packard Plant. Young people are moving there, artists and innovators, because it's economically feasible to have a beautiful place to live there while building your dreams.

That's not why I picked Detroit, initially. I picked Detroit because I wanted urban decay. I wanted a not nice city in which to place my narrator, a formerly drug addicted rock star (think Kurt Cobain), who was kind of a not nice person. And with Detroit, you get decay, and a strange sort of rugged, stubborn beauty. As I researched Detroit further, prowled its streets in Google Street View and read about its trials and tribulations, I realized the level of respect I needed to treat this city with. A great American city, formerly population 2 million, now around 700,000. A great American city, large enough to place Manhattan, Boston, and San Francisco in. Floundering, rusting, growing over. This is not my city. But people still live there, and people are still trying to make it work. Cities are more than novel settings, they are living things. And sometimes, novels are more than just screwed up fairy tales, they're cautionary and end up in teachable moments.

There are no dogs in my novel. It's kind of an unusual thing, I'm realizing at this point. A lot of my fiction contains dogs. However, much like when I see a dog on the show Supernatural, a show I love dearly, I felt nothing good could happen to a dog in this story. And Detroit has its stray dog problems. In fact, Rolling Stone even did an article on Detroit's 50,000 stray dogs.  Fifty. Thousand. The numbers involved with Detroit are staggering, as a rule.

There are people working to make a difference for Detroit's strays as well, though. There is the Detroit Dog Rescue, whose mission is to create a no kill animal center in Detroit. They are a 501(c)3 non-profit dog rescue (info detailed on their Facebook page) started by rapper "Hush" Carlisle and TV producer Monica Martino.   There was originally going to be a Discovery Channel series on Detroit's stray dogs, but the mayor's office said no (perhaps not without good reason, reading that article). So, Carlisle and Martino got together and did the Youtube video, and I guess things went from there. You can view their available dogs here, and even if you're not in the market for a Detroit dog, you should take a look. They've got what appears to be a seriously talented photographer taking the dogs' pictures, which is a very smart thing to have done. They appear to do temperament evaluations (they mention evaluations in at least one dog's description, though don't appear to describe the process on the site, unless I missed it).