The Park in November? You Betcha!

Today was a beautiful, sunny day. Far too nice to stay inside and work on my novel instead of taking Elka to the park. So out we went!

Currently, I have an EZ Dog Harness, sent to me by the company, to review. It has a seatbelt attachment that I haven't used yet, but that was a primary reason for me wanting a harness for Elka. 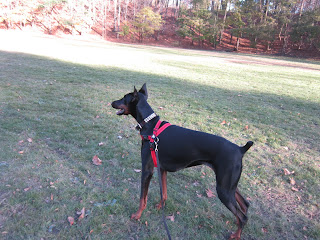 Elka seems to like the harness well enough so far, and I don't have major complaints. Primarily, my worry is that the buckles are plastic. But, she walks well on it (other than having forgotten how to heel, apparently. Sigh.)
It was sunny at the park, and actually rather crowded, but we made a nice circuit and enjoyed the warmth. 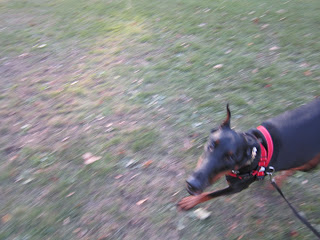 There were a lot of dogs around, but all of them nice and with their owners, and we had no issues with impoliteness. That was a relief, I'll tell you. A lot of people around here, though their dogs seem healthy and exercised, don't seem to actually teach their dogs anything. It's a bit irritating. 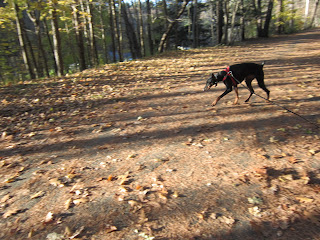 Elka's recall was lovely each time I whistled for her, and I alternated between letting her go back to what she was doing and treating her for it. She scrunched around in all of the fallen leaves, and occasionally splashed a mud puddle or two, just to show 'em who's boss. Interestingly, she works better on the long leash in the harness; it was our first time doing so, so the leash itself got up under her legs sometimes, but she pulled far less and seemed more aware of how much line she had. Not that she's so bad on the regular collar, but it was enough of a change that I definitely noticed. 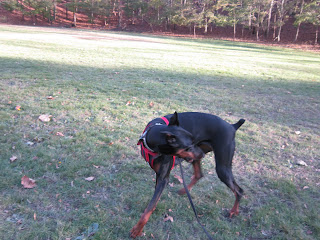 On our way home, we passed a group of teens on the sidewalk, four girls and a boy. The boy, in his very best, deprecating Teen Voice, said "What kind of a dog is that?" In my best Neutral tone (with a little bit of "If You Read a Book Once In Awhile, You Might Learn Things thrown in) I said "She's a Doberman." His reply? "It looks weird." So I, beacon of maturity that I am, said "You look weird." And we didn't hear from him after that. 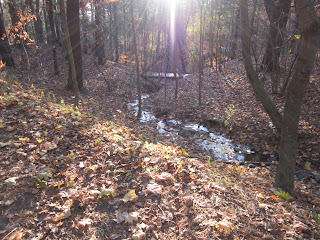