By now, you've probably heard or even read the article "Dogs are people, too" in the New York Times (in the opinion section, despite the usages of Science™ to carry out the experiment. That's telling, n'est-ce pas?) If you haven't, in a nutshell, the neuroscientist on the case, Gregory Berns, trained (with positive methods and help from a dog trainer) a team of 12 dogs to voluntarily go into an MRI, wearing a pair of noise blocking headphones, and stay there perfectly still for the duration of a brain scan wherein they confirmed brain activity that is indicative of canine emotions. 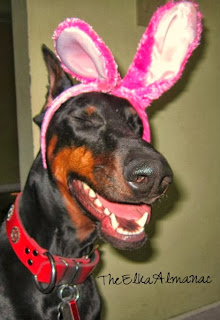 Now, for many dog owners, this isn't a surprise. Not in the slightest. Oh, we've heard "dogs don't actually get jealous" and things of that nature, but ruling out one emotion obviously  (to me) doesn't rule them all out. For many dog owners, especially those of us who train using positive reinforcement techniques, and clickers and shaping, can see dogs think. And we can see their emotions. This isn't anthropomorphizing, in my opinion. "Emotions" are not simply human domain, I do not accept that. I had a book on Koko the gorilla when I was little, and read about her appropriate use of sign language, her want for a kitten, her longing for a baby (Koko is still alive, which I hadn't anticipated, as I know nothing about the life expectancies of gorillas. Similar to ours, I'd guess?). I read about Alex the African Grey in my weekly reader at school, and later (in a book whose title I've forgotten but was about dogs not birds) now Alex could be a very spiteful individual, but how he loved his handler best of all and would pine for her. And how he displayed empathy.

At the library, I come into contact with a good cross section of a child population, ranging in ages from brand new right up to college. I've said/joked for a long time that there is a lot of overlap between child raising and puppy raising, and I stand by that. It's true. You teach 'em to stop being savages, you teach 'em to eliminate appropriately, you give 'em appropriate things to chew on. You watch their little brains work as they wrestle with what you want them to do versus what they think they can get away with. You watch their frustration when they try so hard to communicate to you that one thing which would make their life complete, but you have no idea what they're saying.

I see this with Elka. She knows only the one word, you see, and that word is "Out". She says it like a dog, of course, sometimes more clearly than others. She, for the most part, uses it in a situationally appropriate manner. She'll say it, I'll confirm "Do you need to go outside for potty?" and she'll typically make way for one of the doors. But, as I said, she only has one word, and she knows it gets results. So if her water bowl is empty, sometimes she'll say "Out". Or if she wants food. But for the most part, she's figured out bringing me a Kong indicates hunger. And last night she came to me from the kitchen and went "awawawawa" and I said "Oh, are you thirsty? Do you want water?" When I checked it out, her water bowl was empty. I filled it, she drank some. We're working on "Hello", but she really only says that when prompted, or to get our attention.

You don't need to tell me that as a doting dog owner, I'm subject to confirmation bias; I'm well aware. However, people who aren't dog owners and lovers might not even be open to the possibility that dogs have feelings. It's still a matter of discussion whether dogs think in some circles, while it never occurred to me that they did not. They learn and benefit from the same sort of rewards and reinforcement cycles that humans do, and we all acknowledge that humans think (granted, some better than others).

However. I've also seen Elka clearly "play a joke" on somebody. One of our friends isn't so comfortable with large, boisterous dogs who want to lick him, and I try to manage Elka accordingly. Once time has passed and we're involved with something, though, she'll calm down so I don't restrain her. Well, she'll creep up upon this individual, stepping slowly and without her tags jingling. She'll look around to see if anybody is watching, then lay her cold nose on his neck or elbow, and dodge free immediately to watch him jump, looking around at we observers again with twinkling eyes. I've also known Elka to lie; she tells us she needs to go out, confirms when we ask her, and then sometimes she'll pretend to pee, so that she can then play in the snow, or look at the fireworks, or watch guys down the street doing roadwork.

There's a new-ish dog social media website called Packlove.com. I have a page on there for Elka, with the tagline "Practically Human, But Better". Because for all of her similarities to humans, there are a few key differences. Elka doesn't hold a grudge. If I've lost my patience with her, she still wants to snuggle with me. If I told her I'd give her a toy at X time and didn't, she doesn't pout (indeed, sometimes the reason I didn't is because she'd gone to sleep). She's happy to see me, whether I'm coming home from work or coming downstairs after having run up to retrieve an item. Dogs are love.