So, after last week's Diamond Pet Food recalls, including their Friday "as we go out the door" announcement of recall expansion, we aren't doing Taste of the Wild anymore. I'm not saying that we're dropping it forever, necessarily, but definitely for the foreseeable future.

What have we gone with, you ask? Blue Buffalo Wilderness.

I actually had to sing the first verse of "Home on the Range" to remember the line about the buffalo. I hope you appreciate me. Elka did not. 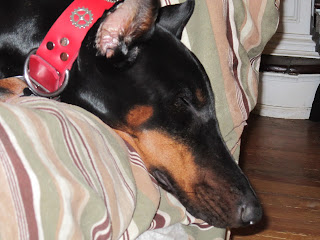 Why grain free, if Elka hasn't displayed any grain allergies?

Well, I do try to feed Elka kibble off of the Whole Dog Journal list. They recommend foods of a quality I can get behind, and there's always Dog Food Analysis to visit as backup. Blue Buffalo Wilderness, which I just looked up (oops), is listed as a 5 star kibble for the Chicken and Duck flavors, which I bought (whew). The Salmon is 6 stars; maybe I should've gone for that.

But anyway. Originally, we fed Elka Holistic Select Large and Giant Breed puppy, per breeder recommendation. A few months into that, she began to display what can be referred to as "knuckling over", also known as Carpal Flexural Deformity. Basically, it looked like her "wrists" were starting to bend backwards. Just the beginnings of it, but I'd never seen such a thing, and it kind of freaked me out. Went to the vet, where they had no idea, but since I'd already Internet researched it, I basically said "Okay, well, I'm going to switch her to an adult food and give her a vitamin for a little while." The tech thought about it and was like "Okay". She got x-rays to make sure her growth plates hadn't closed yet (they hadn't) and with the adult Holistic Select, she was fine. 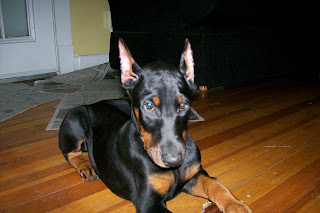 After awhile, though, I was learning more about dog food, and Holistic Select is only a 4 star food on Dog Food Analysis. We had a brief flirtation with Flint River Ranch (also 4 stars, depending on the flavor, but only the first bag agreed with her), and then California Natural, which has a grain free variety not listed or rated. She was awesome on grain free California Natural! Good skin, good coat, good poop. Then the store stopped carrying the grain free. I picked up the lamb and rice, figuring it would be similar, right? Wrong. Elka was ravenous on the lamb and rice. Hungry all the time. We blew through a bag in record time. I needed a different grain free food. The feed store didn't have Blue Buffalo at all, and I went to Tractor Supply, where there was Blue Buffalo, but not Wilderness. They did, however, have Taste of the Wild. Bingo!

I don't tend to buy a new bag of dog food until the old bag is gone, so, my new bag of Taste of the Wild, opened on Friday discovered at 11 pm to be suspect, was all of Elka's old food that I had, and I wasn't keeping it. So, she went foodless until Saturday morning, and then it was Blue Buffalo, cold turkey (Well, chicken). Her stomach was a bit upset yesterday, and her poop this morning was awesome (things you never thought you'd say) and then runny just now. I feel bad doing that to her, but it was that or maybe-Salmonella. She seems to like it a good deal. It also, apparently, still goes well with peanut butter. 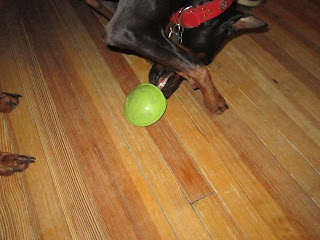 Downsides to Blue Buffalo Wilderness: it costs more than Taste of the Wild, and for a smaller bag. I'll have to do some prowling online to find deals for it, now that I have two 5 pound bags of it, and thus some breathing room. One really nice thing I've noticed about buying premium kibbles is they don't really smell like dog food. They don't smell like people food, but they don't have that rank, grainy, dye-soaked Kibbles 'n' bits odor. Also, Elka's poops (when solid) are smaller, and more or less dissolve in water. It's kind of weird, but also neat, if such a thing could be considered neat.