The Doberman: American and European

I also bring this up because on Monday, some lady thought I had a Greyhound mix and not a Doberman at all, because her historic Doberman wasn't "like that". 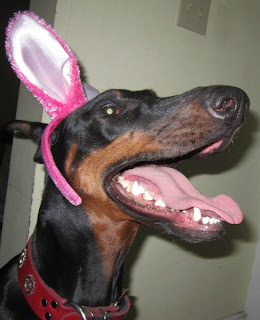 Disclaimer: these are my observations of a couple of years of Doberman "study". I do not feel American is better, or European is better, or working is better, or show is better. The Doberman that one chooses is the Doberman that is the best for them. When looking for a dog, different people look for different things. These are all still Dobermans. This is also a good way to start really heated conversations on Doberman forums. I'm not setting out to be insulting to anybody, and truly, I don't have insults to throw about these wide categories. I just love Dobermans, and think it's an interesting topic in this venue. If I say anything that is actually incorrect, please let me know, and I'll fix it. It sucks to be wrong about something, especially in such a public venue.

In appearance, the American Doberman is frequently a bit taller, and a bit lighter boned. Their heads are a bit less blocky. They tend to have the longer ear crops; indeed, in some European countries (and others) it is now illegal to crop and dock. People who are "pro Euro" and detractors of the American dogs say that they're too leggy, too light of bone, and disposition wise, they say that these are dogs that cannot work. American detractors of Euro Dobermans say that they're "fat", too heavy of bone, have heads that are too square, have females that have very male heads, etc.

The European Doberman, depending on the country and on the breeder, is a working dog first. I read somewhere that in Germany, to have a registered litter, the dogs used to at least have passed the temperament test that then allows them to test for Schutzhund titles. I'm not sure if this would have been before or after conformation titles, or if this is even true, but I do like the idea that a dog that is titled front and back (i.e., has conformation championship and working titles) is more likely produce better dogs.


I downloaded the Dobermann standard from the FCI website; in the United States, we have the AKC (American Kennel Club) and the rest of the world (depending) seems to use the FCI, which is the Fédération Cynologique Internationale. Really, the two standards agree on a lot. The head must be a blunt, dry wedge. The Doberman is a medium sized breed. The croup shouldn't be too pronounced, the dog should be square and proportional. The tuck up is specifically mentioned in both as well. There isn't much detail yet in the FCI standard as to what a natural tail should be like, though it does mention that natural ears should be close against the cheek. 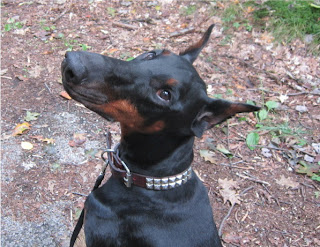 So, what's the controversy here? Appearance wise, there should be only so much allowable variation within the standard. As a medium sized working dog, not much can be exaggerated without compromising that point. The hindquarters of the Doberman will never (God willing and reason prevailing) go froggy like that of the American show line German Shepherd (maybe show lines are getting like this in other countries as well, I confess I have no idea).

It is a disqualifying fault in the FCI for "Fearful, nervous, and aggressive animals". In the AKC "the judge shall dismiss from the ring any shy or vicious Doberman." Height is not a DQ in the AKC, though it is in the FCI (though I imagine you still lose points). "Dogs of a not allowed color" is also a disqualification in the AKC, as the only four colors allowed are Black, Red, Fawn, Blue (This is so far as conformation goes; Albino Dobermans are allowed in performance events such as Agility and Obedience). In the FCI, it seems that Black and Red are the allowed colors; maybe one of my non-American readers can clarify that for me?

In pictures, I've seen both American Dobermans and European ones that are just breathtaking. I've also seen American Dobermans working (again, online) and that have Schutzhund titles. There are definitely breeders who want a working dog, even stateside. There are also some breeders in the US who imported their original breeding dogs from Europe, and have maintained that European line. So, again, it's a matter of what you're looking for.

Elka has a lot of European dogs in her pedigree who are titled front and back. Notably, Franckenhorst kennels features in, with her great-great-grandmother being Dea Dolores Vom Franckenhorst. There is also van Neerlands Stam in a couple of places. So, the good dogs are there in her pedigree, anyway, and for the most part, they're from Europe.

So I guess I haven't really cleared up the argument. Really, I don't get the controversy, but I guess I don't know enough about it, and depending, people don't discuss it on message boards long enough (and rationally enough) for me to get a clue. So I get "Euro dogs are fat" and "American dogs can't work", both of which aren't true. I will continue to believe that both "types" of dog are all right, depending on what your need and preference is, and leave it at that. 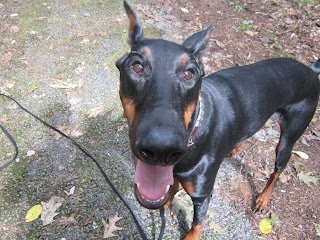