The AKC is, for better or worse, only a dog breed registry.

A lot of people take the phrase "AKC registered" to mean that the organization enacts some form of quality control. That is, unfortunately, not the case. AKC championship holds more water, though based on what your opinion of the functionality of a breed is (modern day US showline German Shepherds, I'm looking at you!) even that is suspect.

So, what does this kind of popularity mean for a breed? 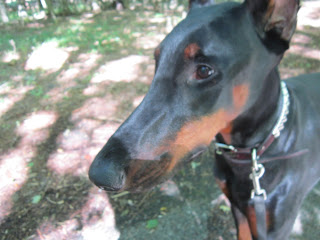 Let's look at the German Shepherd (you knew it was coming, right?) I watched this year's German Shepherd breed judging on the Westminster website, and I was truly shocked. I'd heard some dog people talking about show line German Shepherd toplines, and the way their back legs were. I didn't really investigate, as I wasn't interested in the breed, and I watched an old clip of the Doberman judging (the new one wasn't up yet) before going to the GSD's. People on Twitter (and show GSD people) absolutely loved the dog that won his breed, how he moved, etc. To me, he looked crippled. He looked like he was stumbling over his paws, and like his rear assembly was going to give out on him at any moment. I have a lovely .gif (that I saw first on the Doberman Talk thread that discussed the Westminster GSD breed winner) that demonstrates how German Shepherd toplines have changed over the years, and let's see if it works properly.

Even if you're not a "dog person", and even if you're not a "conformation person" (I don't feel I'm qualified to call myself a "conformation person", that doesn't look right. I'm not sure what function it's even supposed to serve, really. People selected for it and bred it in for a reason. The front angulation seems to go all funny as well (now that I'm watching it over and over again). The breed standard, for your edification, states "The withers are higher than and sloping into the level back. the back is straight, very strongly developed without sag or roach, and relatively short." Again, I'm not really qualified to say, but "level back" and what the .gif shows (in addition to what I saw  at Westminster) doesn't really seem to reflect that.

So, what does such a thing mean for the Doberman? 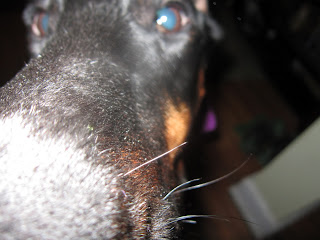 When a breed gets popular, there are always breeders who will be on that bandwagon. Breeders who crank out as many litters as possible out of the same female, and sometimes the same male/female pairings, without an eye towards health testing, or temperament, or the overall betterment of the breed. Breeders who sell puppies to whoever shows up with a checkbook or cash, without asking about owner experience, or how the puppy will be kept, and sometimes without a contract to protect either party, much less the dog's interests.

When a breed gets popular, and the puppies get bought, frequently those unprepared owners will end up frustrated and at wits' end, and those puppies, either making it to adulthood in their first homes or half grown, will end up in shelters. If they're lucky, they'll end up in breed rescue, with professionals and volunteers who know about that specific breed's needs, and who are able to appropriately screen homes and match owners to dogs. Even at number 13, there are a lot of Dobermans in rescue. There are a lot of Dobermans getting dumped in shelters, and who are for free on Craigslist (with GOOD HOME ONLY in caps, so the people giving them away knows you know that they really mean it).

I love the Doberman breed. I love what good breeders are trying to do with health and temperament, looking towards stable, intelligent dogs who have every chance the breeder can give them at a long and healthy life in a home that loves them.

That's why I kind of think of it as "Lucky 13". Enough to know that people love them, far enough down that maybe, just maybe, too many more people won't get in over their heads. Puppies grow up fast. Smart dogs can be very hard to live with. And I like my working breed physically able to still work, thanks. 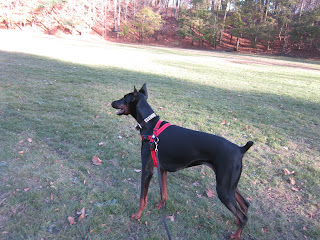 (Not that Elka is a conformational marvel herself, mind you. But she's good enough for me!)