A lot of serious stuff lately....Heidi the Doberman, the fundraiser for the Doberman Assistance Network, and poor lost Blue in South Carolina. Today is another one: the FDA warning on chicken jerky treats.

This isn't a new warning, the chicken jerky thing, but somebody on Doberman Talk linked to an article on Dogs Naturally Magazine that included testimonials of "Waggin' Train Victims", and I thought it would be important enough to talk about. I used to buy Waggin' Train jerky for Elka, so this feels like a near miss for me. Not every dog gets sick from it, but it's still a serious deal. I stopped buying jerky products for Elka because I noticed that most of them are treated by irradiation, which kind of freaks me out. I'm sure it's technically safe, or that's what everybody wants us to think, and I'm not a scientist, just a paranoid consumer, and choose not to purchase such things. 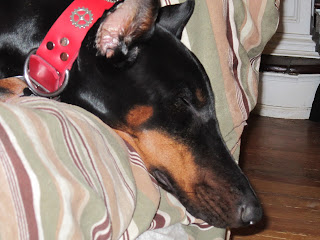 So, the FDA warning includes the symptoms that sickened dogs share:

FDA is advising consumers who choose to feed their dogs chicken jerky products to watch their dogs closely for any or all of the following signs that may occur within hours to days of feeding the products: decreased appetite; decreased activity; vomiting; diarrhea, sometimes with blood; increased water consumption and/or increased urination. If the dog shows any of these signs, stop feeding the chicken jerky product. Owners should consult their veterinarian if signs are severe or persist for more than 24 hours. Blood tests may indicate kidney failure (increased urea nitrogen and creatinine). Urine tests may indicate Fanconi syndrome (increased glucose). Although most dogs appear to recover, some reports to the FDA have involved dogs that have died.

This FDA update was on November 18, 2011, and included this link, for if your dog exhibits any of these symptoms to complain http://www.fda.gov/petfoodcomplaints.

It's unfortunate that we have to be so careful with the products that we buy to consumer. Waggin' Train, I thought, was made in the USA, but that appears not to be the case. So far as consumables go, those Made In China have had a pretty terrible track record in the past few years. Infant formula recalls, lead of absurd level in children's toys, and now this, though "this" has apparently been a program for years now. Since 2007, it would seem.


5 years (or 4 and change, if it isn't exact yet) is an awful long time for something like this to be going on. Of course, there aren't global standards or requirement for things like that. Better safe than sorry, truly. I can, in theory, even without a dehydrator make chicken jerky myself for Elka, if I so desire. Maybe that'll be next week's Tasty Tuesday! 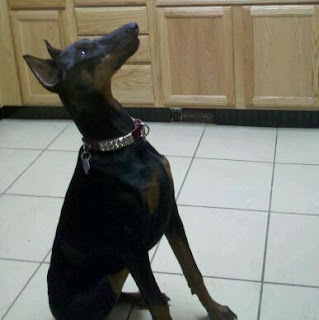 Email ThisBlogThis!Share to TwitterShare to FacebookShare to Pinterest
Labels: FDA warning, jerky treats, made in china, not so tasty tuesday