With Cpl. Megan Leavey, which is what we were rooting for in my previous post. 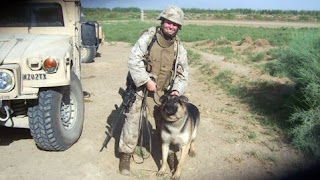 (photo lifted from ABC article. I assume it's them)
Tuesday, in my blogroll, Philosopher Mouse came through with the news, and I just had to share it here as well. To recap, for my own edification, it looks like the Change.org petition got 6334 signatures (fewer than I'd hoped for). The petition on Senator Charles E. Schumer's site, though? 21,928! Pretty rocking.
Articles here on the Wall Street Journal site, and here at ABC news.
Quoted from the Senator's site:

Corporal Megan Leavey and her military working dog, Sgt. Rex, served two tours of duty together in Iraq in some of the most dangerous conditions in the world. On a daily basis they searched for and identified roadside bombs and other improvised explosive devices (IEDs) that were targeting our soldiers in Iraq. While millions of dog lovers across the country develop deep bonds with their 'best friends', the bond forged between Corporal Leavey and Sgt. Rex is one that few of us will ever know. That is why it was so important to me that they be reunited, particularly now that Sgt. Rex is ten years old and can no longer serve.

I'm not sure what the exact date Sgt. Rex will be in Cpl. Leavey's arms, but I'm sure she's counting the minutes. I know I would be!
Posted by Jen at 12:00 AM