There are times Elka's mere existence amazes people. There aren't many Dobermans in my town (I saw one from afar the other day, and we played with a puppy last year or the year before), and even a not conformationally correct Doberman is striking. Elka is also very large, which adds to the wow factor.

People will stop their cars in the middle of the road to call to me about Elka, how pretty she is, or how well behaved. This has happened ever since she was itty bitty, and we were on our first walk with her ears still posted (okay, so I was carrying her). All right, so some people (again, more than once), have asked if she was a greyhound mix, but even if Elka doesn't display conformational perfection, she is clearly a Doberman. The picture of her above could be called a "free stack", but she isn't standing straight, and she's hunching her back some. 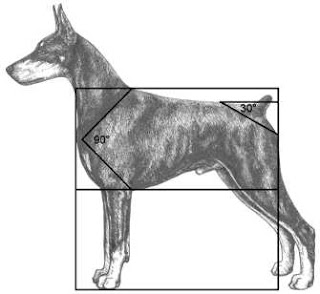 I see Elka every day, but she still wows me. There are times it's hard to believe this dog is "mine" (so much as any living thing is, I guess). We were at the vet last week, and I ran into a library person there who was also very admiring. When I saw her the next day, she turned to her companions and said "The intelligence on that dog's face, when [Jen] was talking, was just amazing."