We Got an Award! Thanks, Saved by Dogs!

Saved by Dogs has honored me (us?) with the Versatile Blogger Award! I do love getting awards, because who doesn't like being praised for all of the blood sweat and tears that they pour into their keyboards, right? Right.

I try to get Elka excited about them as well. I mean, I can get Elka excited, certainly, but I guess she doesn't really understand the ramifications of "a very important award", being a dog and all. I mean, we still think she's awesome, but sometimes that dog thing is an unforeseen limitation. 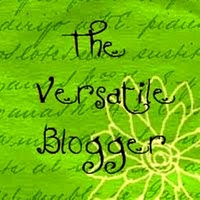 So, the rules. Share seven things you might not know about me (or us) and pass it on (though, holy smokes, the official rules are pass it on to 15 bloggers! 15! I think I may have groused about how hard it is to only pick 15 blogs before. Maybe not. We'll see how it goes.)

1. My dog knowledge, from books and the lovely Internet, has reached the point where I get accused of making up dog breeds. I mean, okay, I can claim knowledge of things with a straight face pretty well, but I don't make up dog breeds. The Catahoula Leopard Dog, Blue Lacey, Nova Scotia Duck Tolling Retriever, and Cavalier King Charles Spaniel are breeds that I've been accused of making up in my head. I haven't, honest. And they're neat to learn about!

2. A few years ago, I almost decided to go to library school. I thought about it, got course catalogs from people, that kind of thing, but ultimately I decided that I couldn't happily maintain an academic interest in the study of librarianing. I mean, a whole course in cataloging? No thanks. I've worked in a library for eight years, and while that doesn't make me a librarian, I guess I'm happy enough where I am at my knowledge level.

3. I've recently discovered that writing a query letter and summary is harder than writing the book itself. I've talked about my writing fiction here a time or two, and I've been editing and trying to write a query for my book Learn to Howl, to become one of those "real" authors instead of one who just keeps talking about it. It's a process, I assure you. They don't tell you about queries when you're in school, and I wish they did. I mean, not that I was an English major anyway. But I should've been.

4. One of our hobbies (and this one's a cheater, I have posted on it once before) is tabletop role playing games. Right now, for Spring and Summer, we play the Pathfinder flavor of Dungeons and Dragons (we didn't like 4th edition when it came out). In the Fall and Winter, we play the World of Darkness, put out by White Wolf publishing. This hobby and interest, for me, started in college. My fiancé has played much longer, starting in middle school. I'll tell you, though, I wish I'd known about gaming far earlier; it's telling a story with a group of people, each person responsible for their own character and that character's actions. It's like improv theater, or make believe, with rules.

5. In general, my home cooking is safe for Elka, because I don't like onions, that supposed bane of doggie culinary existence. I do love garlic, and I know that one is a "controversial" ingredient, because people aren't sure if garlic and onions are closely related enough to cause dogs problems. I can tell you that Elka hasn't seemed to suffer any ill effect from the people food we've shared with her.

6. I don't really know any other languages. I'm familiar with some French, because I took that in both elementary school (I was in what was called the Launch Program, being a genius and all) and in high school. Any German I know is largely dog related (commands and such), and my Spanish is limited to a handful of words, some of which are the curses from Ernest Hemingway's book For Whom the Bell Tolls, which takes place in Spain and was published during a time when "bad words" were not necessarily thrown so lightly in publishing. So, the bad words are in Spanish. It was rather illuminating. And it's one of my favorite books, for a  number of reasons not related to bad words.

7. While I am registered to vote, I'm registered as independent. My politics are kind of all over the board, and really, I'm coming to the school of thought that America's bi-partisan politics are (currently, anyway) more harmful than helpful. Things need to stop being "Republican" issues or "Democratic" issues (which, by the way, used to be kind of flip flopped. Which I learned from reading Gone with the Wind, not in school. Oh, the rant I could go on about the teaching of history I received....but that's a story for another day), and they need to be looked at as more "big picture" issues, and then maybe some things can get freaking fixed.

All righty, now to pass it on!
Fifteen bloggers I've recently discovered, or follow regularly (there are sure to be doubles here either from the last time I've done this, or from others having given them this award as well. If you're good, you're good. It's just the way things are! That, and not everybody I read seems to want to/like doing blog awards. Which I can respect.)

1. Donna and the Dogs
2. Heart Like a Dog
3. Dogs n Pawz
4. Spotty Spotty Polkadotty
5. The Misadventures of Misaki
6. The Poodle (and Dog) blog
7. Rescued Insanity
8. The Storm is Over
9. Two French Bulldogs
10. Dog Treat Web
11. Bringing Up Bella
12. Ruby the Airedale
13. Something Wagging This Way Comes
14. Roxy the Traveling Dog
15. Clowies Corner