A big huge flag in the Doberman community is when a male puppy is sold to people with another male dog in the household already. Why?

This is problematic, as we do not typically want dogs to fight. Not unless you're a scumbag. 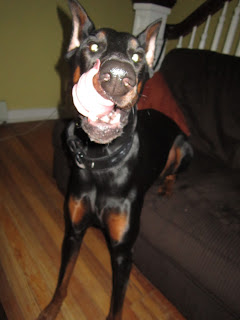 Now, since it's mentioned on the Doberman Pinscher Club of America web site, and an "aggressive or belligerent attitude towards other dogs" is not a DQ in the AKC ring, I thought it was accepted knowledge and recorded somewhere, scientifically, that Dobermans can be same sex aggressive. This does not mean they will be, nor will always be, etc. etc. But that it can happen.

Wouldn't you know I can't find anything on it? Not really. Not to my satisfaction. There's a wealth of information on Doberman Talk, of people discussing their experience with males turning same sex aggressive at sexual maturity (2 or 3 or so), regardless of whether they're subsequently neutered, the other male dogs are neutered, etc. "Crate and rotate" is something that many houses are familiar with, because they absolutely cannot trust their male dogs together, supervised or not. And these are people who have been in Dobermans for years, decades. Who train and socialize. Who buy from reputable breeders who title their dogs.

So why no studies?

I found other studies, other things that mention same sex aggression in dogs. But not Dobermans, or really any other breed by name. But I've found Dobermans mentioned as a same sex aggression candidate in other places on the web than just Doberman Talk. It was in a Yahoo! answer. It was on a German Shepherd message board. So people know. There just isn't "literature". It's rather frustrating.

This article on Canine aggression mentions it in "types of aggression". The RSPCA has an FAQ on canine aggression, which includes topics such as "if I neuter my dog, will the aggression go away?" I found somebody's Master's thesis on "Management and Rehabilitation of Inter-Dog Aggression in Animal Shelters". I found an article on Canis Major about dogs fighting. I found a presentation, with powerpoint slides, on "Scientific research studies that found spaying and neutering do not reduce aggression in dogs". And last but not least "The Effects of Spaying and Neutering on Canine Behavior".

I really want "my Doberman people" to be right. They are the voice of experience, and I pretty much trust them (many of them, anyway) as the Voice of Experience on Doberman things. I came in a total novice, and I've learned a lot from them, and learned what to look for and what questions to ask when furthering my research.

But especially when trying to educate somebody online (or at the very least, when trying to present a reasonable point of view when you feel they are perhaps not making the best decisions), you want to be able to cite sources. Not just say "so and so said and so did Bob". I do not like handing out incorrect information, but it can't be "proven" correct without citations, you know? Citations or no, I feel all of these peoples' experiences are valuable information, and as I said, to be trusted. But somebody determined to be right whose views differ are obviously not going to see it that way.

Sometimes they don't want to see it any way and they're really just trolling after all, and it's a situation like that which sparked this post but.....it's still food for thought.
Posted by Jen at 12:00 AM