There are times Elka becomes aware (or decides that she's aware) that Something Happened outside. Or that Somebody is there. Or maybe the wind blew. Something.

But she'll go look out the door, or a window, growl or grumble, and sometimes give a bark. Invariably, when she decides she's the home's protector (or at least that something requires our attention), she sports a "mohawk", as we call it. Or, as Real Dog People call it, piloerects. Piloerection is when the hair stands on end; on a sleek, short haired dog like Elka, it is really very apparent. 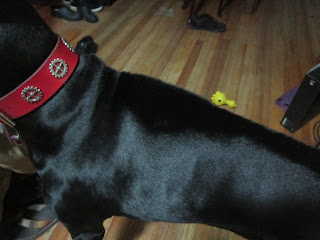 There's an interesting, very short article, on The Bark about the different ranges of piloerection the author has noticed, and what she interprets them as meaning. I can't really say that any of the three states of piloerection that she describes are entirely accurate with regards to Elka's demeanor, though saying that one of them (a patch of hair on the shoulders and a patch by the tail standing up, with nothing in between) reflects emotional ambivalence is probably pretty close. I haven't kept a fully accurate log either, that I could say. But I also haven't actually seen Elka behave aggressively, ever. 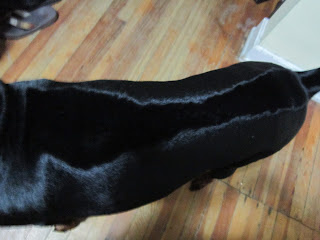 Even when Elka is has gone "full mohawk", as you can see above, she's still under threshold. She still listens and responds accurately to cues. Typically, I'll check out the door, or window, and go from there. I will always say "Thank you" to show that I acknowledged her "alert", and that it is my responsibility at that point. If I see nothing, I'll tell her "There's nothing there, all done." If it's neighbors coming home, a dog going past, I'll say "I see, all done." We'll also frequently say "put your mohawk away", which is fun to say, and not necessarily a cue that Elka understands. 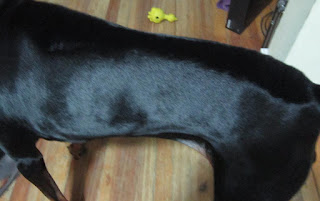 We always have more "alarm" incidents when it's nicer out, and we have the inner door open. When Elka can see and hear the local wildlife (read: college students), she's far more likely to want us to know what's going on. I mean, they interest her, we must care too, right? Yeah, not unless they threaten to cause property damage.

My opinion on piloerection, based on my Elka observations, is that it indicates arousal. Not necessarily aggression, not necessarily fear, though these two things might fit into that category, depending on the dog and the situation. If a dog was giving me a fixed, hard look and was piloerected down his or her back? Yeah, I would believe that dog was ready to be aggressive. But plain old, amped up, "Hey!" seems to be the usual pattern of piloerection for Elka.