When I was little, I loved pasta. LOVED it. When we went to restaurants, I wanted spaghetti with butter on it. Sometimes cheese, but only American. I graduated to cheddar eventually. At home, I loved boxed macaroni and cheese. In fact, it's one of the first things I learned how to make on my own, on the stove.

I still don't much like red sauce. I am from the state of New Jersey, which means I must love tomatoes, and I do, but I pretty much can't/don't tolerate cooked tomatoes. Only in specific instances.

One of these instances? Penne a la vodka. Or rather, pasta with vodka sauce. I don't always use penne, though some kind of ridged tubular pasta is best, to catch the sauce most efficiently. I tried it at a restaurant once, when somebody else at the table had it, and went home and finagled my own formula, involving chipotle in addition to the regular crushed red pepper, and sometimes using bacon instead of the pancetta. I also use Asiago instead of regular parmesan, and some white cheddar (picky picky, right?), and add diced chicken breast.

Because of the alcohol (and because it's so darn good), this is one dish that doesn't typically get shared with Elka. 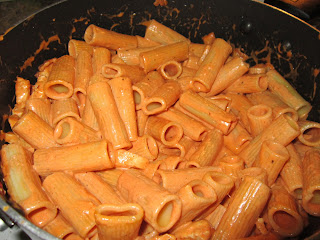