Until I saw the article in the New York Times (Bonding with their downward facing humans), I never thought about dogs + yoga.

My Yoga practice has always been exceedingly private.  Home alone, with a DVD, curtains drawn private.  Of course, with Elka, you're never, in fact, alone, and this extends to yoga.  There are even two books about dog yoga (sometimes called "Doga"), one I have read, and one I have not. The Barking Buddha, by Brenda Bryan, with Bev Sparks doing the photography, is the one I have read.


I admit, when I heard "dog yoga" my immediate thought was "why?!".  The New York Times article didn't help, as the lead-in picture is of an obviously frightened dog (whale eye! ears!) being held on his owner's stomach while she is in a yoga pose, with the "dog holder" standing on the dog's leash, preventing his escape should he slip free of her grasp.  That kind of tableau makes me think doga is for the owner's benefit, not the dog's.  How enlightened we seem, that we're so open minded and hearted that we can share our yoga practice with our dogs, who would benefit from such ancient relaxation techniques.  If you're busy opening your heart chakra, I suppose it's easy to miss your dog's body language.  Many of the dogs in the New York Times Dog Meditation slideshow look uncomfortable or freaked out by what's going on.  Others seem pretty laid back.  Many (the larger dogs) have their own yoga mats right next to their owners', on which they recline, and those, I feel, are the happier looking dogs pictured.
I've had mixed reaction from Elka when I've done yoga.  If she's curled up and asleep on the couch, she'll raise her head once in awhile to watch me, but that's about it.  She's getting used to we humans doing very odd things.  If she's up and active when I roll out the mat, though, she's far more inquisitive.  While doing triangle pose, Elka might "bow" with me.  While doing downward facing dog, she comes over and smells the top of my head, and licks my neck.  Gumby in his various incarnations get dropped next to the mat, and a horseshoe is placed on my knee.  It's all very funny, as she's so inquisitive and excited, wondering what I'm up to.  In Tree pose, which I'm admittedly not all that good at, Elka will come and stand right by me, in such a way that if I put my hand down, it's on her braced shoulders. 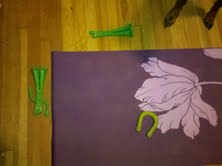 So, if Elka is part of my yoga-ing in that manner, it's voluntary and fun for her, and I'm not forcing her participation.  Barking Buddha (nope, didn't forget that I was going to talk about a book!) is a bit more like that.  The dogs are involved with the poses, but seem okay with it.  None of them (that I can immediately recall) are showing whale-eye, or look as though they would like to run far far away from the place.  The pictures also tend to show you a couple of variations; if you have a big dog, you won't be winging her around in the air as easily as a small dog.  I can pick Elka up, but I can't exactly do Warrior pose with her in my arms (currently, anyway.  If I keep picking her up, and keep doing yoga, perhaps the two shall meet).  But again, she's coming to me, and frolicking about, reacting to what I'm doing. I haven't dragged her out to a yoga studio full of strangers and other dogs, whose behavior is tantamount to this whole thing being successful.  Also, the yoga teacher's comfort and experience with both dogs and yoga must really be put to the test in those cases, especially if the teacher is also going to be handling everybody's dogs in order for the poses to be successful.  So, for Elka and I, the "yoga game" will continue to be an at home, voluntary, for fun one.