The things you notice

It's funny, what you notice when you're walking around an area, rather than just passing through in your car.  It's also funny to see what your dog notices.

For instance, a person in the neighborhood has a garden with a very low stone wall around it.  The first couple times we passed, I didn't much look into it.  One day, Elka stopped, and backed up, and looked over the wall and then up at me.  Near the steps, in a flower bed, was a small gray stone statue of Little Red Riding Hood with the Wolf standing behind her.  Elka considered it for a moment again, and then looked up at me expectantly.  "That's Red Riding Hood and the Wolf," I told her, because what else was I going to say?  She clearly thought about this answer, and then we started walking again.

A Google search turned up a large statue in Barcelona, Spain that looks remarkably like the one in that person's garden.  For whatever reasons, the small local one isn't there anymore. 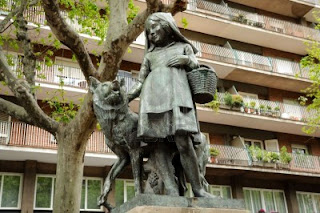 In the park, to which I paid only cursory visits before I got Elka and before we became regular walkers, there are many things to be seen.  Amongst bushes, nearer to the street, there are memorial markers for local fire dogs.  It had never occurred to me before to look at what the two bushes and two trees planted there had to offer.

(yes, that is the end of Elka's tail in the bottom left of the picture)
Along one of the paths, there are Ash trees marked as being threatened by Emerald Ash Borer Beetles.  I didn't know what an ash tree looked like, for one, and I didn't realize that beetles in general were a problem.  Or at least not to that degree. 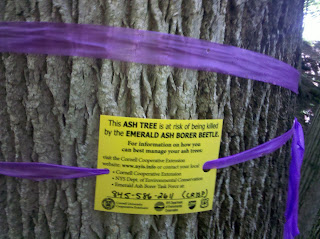 The further we go, the less apparent the "hidden treasures" are.  As we walk, I'm frequently looking down.  I'm either looking at Elka, or looking for broken glass, which is unfortunately common wherever we walk.  But, looking down is how I noticed the strawberry plants. 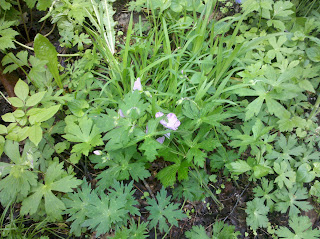 Frequently, there are times when Elka notices something before I do.  This is to be expected, considering the heightened hearing and scent that dogs experience.  She likes looking at birds, and is intrigued by bumble bees, and will watch the occasional helicopter pass overhead.  Flying is a mystical, kid-on-Christmas-morning thing for Elka, and I love seeing the wonderment cross her face as she tries to figure it out.
She is also very interested in deer.  If they're in the yard, she will sport a mohawk (that's "piloerection", if you want to get technical), and get growly-talky about these big, hoofed creatures apparently invading our home.  We've only seen one so far when we were on a walk, though, and all Elka did was stop and look.  I didn't realize at first what she was looking at, and then I did.  I took a picture, but you can only barely see the deer (right smack in the middle of the picture).  I couldn't remember how to zoom on my cell phone camera and didn't want to not get the shot. 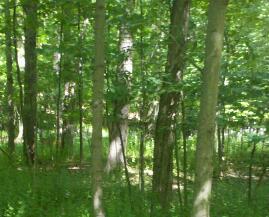 There is also a particular tree with a hole in the side of it.  Elka is fond of trying to stick her face in the hole and listening to me tell her no, as I imagine a raccoon or something latching onto her big long DoberNose.  Better safe than sorry, even if I'm ruining fun.  It really rather looks like the house of some fairy tale critter, at the very least.  Or lots of spiders. 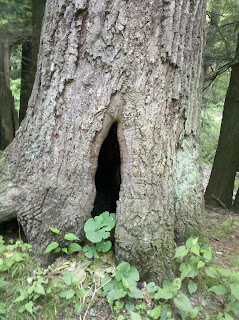 Also, as previously  mentioned (and pictured), there is a particular place in a particular stream that Elka likes jumping into and prancing around.  Maybe one day she'll even pay attention to the big stream, who knows? 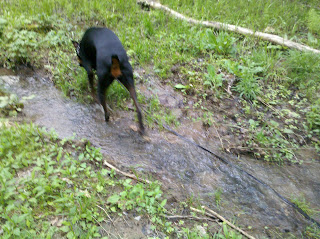 When she's done (and she's never in for very long), she gallops around me in a big happy circle, leaving little splashes and wet footprints behind. 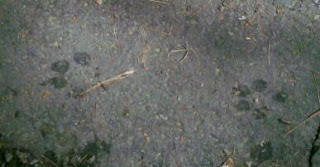