I'm sure by now, Gentle Readers, it has come to your attention that a Court of Appeals in Maryland has ruled pit bulls "inherently dangerous" and also "negligent to own".

Calm your outrage for a moment. Lord knows it's hard.

It is important to know the details. I don't support them in any way, but it could be worse. Maryland has not outlawed the ownership of pit bulls. State law enforcement will not be knocking on doors with a measuring tape and removing peoples's dogs, as happens in a certain country in the UK. 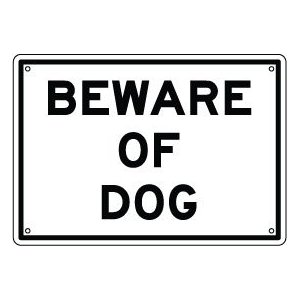 It seems that, as it stands, the ruling in Maryland just seems to make it easier to prosecute a dog bite case. Right now, as per DogBiteLaw.com, Maryland is a "one bite state", and as per the same web site,

"the rationale of the one bite rule was that domestic animals by definition were not injurious, and therefore liability could be predicated only on the defendant's knowledge that a particular animal had a propensity to behave in manner that was injurious to humans.


Again, the rule applied to any type of injury, whether or not a bite.
The rule provided not only a shield for the animal's owner byt also a sword for its victim, because it justified compensating any victim -- after the first one --who was injured by the same dangerous propensity. The owner, keeper or harborer of the dog thus was held strictly liable when his domestic animal injured a subsequent person the same way it hurt a prior one, provided that the owner had knowledge or "scienter" of the animals' dangerous propensity."


So really, what the Maryland court of appeals seems to be saying is that a pit bull, by existing, has already used up its first bite. This will make it easier to prosecute a dog bite case against a pit bull, and thus owner and landlord liability, whether the dog has previously bitten or not.

Of course, they fail to operationally define what breed, specifically, is a "pit bull", if you're going to make legislation specifically targeting them. I feel you ought to prove, without a shadow of a doubt, that the dog being prosecuted and the owners blamed is in fact whatever a "pit bull" is defined as. Also, according to Gazette.net in Maryland (I'm not in Maryland, so haven't read the law thing specifically), "the language is broad enough for the future inclusion of other breeds in the definition of inherently dangerous".

As you might have guessed (or known flat out, if you've been listening), I'm against breed bans. Any dog can bite. Some dogs, like some people, are born "not right". All pit bulls cannot be called vicious killers. Nor can all Dobermans, as an example. Breed bans do not reduce dog bite incidents in the areas in which those dogs are banned, because breeds aren't the problem. Bad ownership is. Bad situations are. Education about dogs, and dog behavior, is the best way to "fix" this dog bite epidemic that we seem to be having. Will that fix everything? No. But it would go a long way towards a solution.