The Gross Things We Give Our Dogs To Eat

It occurs to me once in awhile how very odd some things are. Things that "dog people" think are normal, and that non dog people look at askance.

For instance: the dried up gross things that we give our dogs to eat. Pig ears. Bully sticks. And now, beef trachea. Tracheas? Trachea. Or, in this case, fetchingly called "Toobles", because baby talk makes everything better. You'll also note that this bad boys are labeled "Made in USA". Hope it's true! 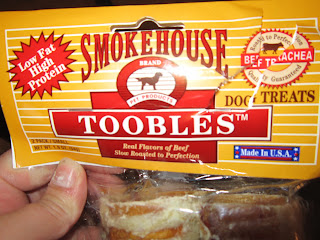 Unlike some dried animal parts, the beef trachea did not have a foul odor. That was a relief! Sometimes I give something to Elka that I soon regret, as she then wants to love me with her reeking muzzle, and can't fathom why I don't want kisses. 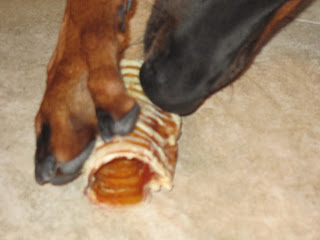 The treat was not long lasting (5 minutes, tops) and was rather loud as she was chewing it. I never previously thought about what I would imagine a windpipe being crushed sounded like. Now I know. Granted, this was a dried windpipe, and not possessing of the other surrounding tissues that would usually be associated with it, but there, you go. 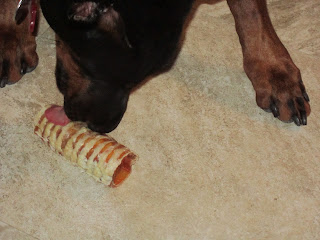 You can also see in those pictures that I've been working on Elka's nails. They're still a bit too long, but I don't want to take off too much at once, obviously. She hasn't been quicked yet, and I don't aim to do so.