On August 5, five Dobermans were left from the dogs who were rescued in Conklin, NY.

Well, now there are 4 left! Or I thought there were....Dusty is back on the site again. I wonder if the removal of his picture (or its reappearance) was a glitch? I hope he wasn't adopted to a family unprepared for his Doberness, and returned already. That would be very sad. Dusty appears to be a fawn, perhaps with color dilution alopecia. Since I'm already speculating a whole lot, I might as well mention that a good and balanced diet might go a long way for Dusty, considering the situation from which the dogs were removed. He's listed as 4 years old. 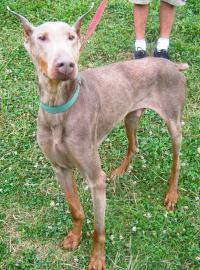 Houston (my personal favorite; shh, don't tell the others!) 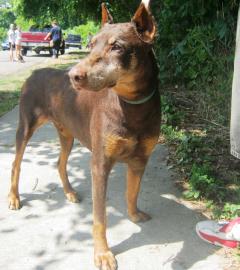 And last but not least, Sasha, who has at least one application in from a family who wants to take her home!

Edited to add:  If you read in the commends, KimyandKaylaa has said that their application for Sasha has been approved, and she will be coming home on Saturday! Woo! Congratulations to them, and to Sasha!

The last time I posted about these wonderful dogs, Kimy and Kaylaa responded that they were so happy to have found my post! They are the ones who (with their MinPin) have an application in for Sasha, and they met all of the Dobermans when they went to visit! They said that Sasha of course stole their heart, and that Nani and Houston were both dolls. They said that Storm was rather reserved, and that he barked a lot to make sure everybody knows what a Big Boy he is. I'm sure this whole thing has been very scary for him, and I hope that a Dober-savvy person comes along to adopt him and give him a nice stable home life where he can gain the confidence that he deserves to have.