I've been posting a lot about the Dobermans from Conklin, NY, some of whom currently reside in the Broome County Humane Society. Trust me, I know. Have you seen the news? Sasha, of that group, has been adopted. She'll be going home on Saturday!

There's a certain magic that seems to happen when people see dogs in need, in person or online. So, I thought I'd tell you a little story about something that I witnessed on Doberman Talk on Wednesday.
Somebody posted a link to a Last Hope Doberman rescue in Texas' Facebook, and a small story.

This little girl is 6 months old. She was literally on the table to be euthanized when the shelter tech begged, and got, one more day for her. That's right; almost to the needle on 8/15, and the tech bought her time until the morning of 8/16.  Last Hope either didn't have the room, or didn't have the fosters, and so put out the plea. 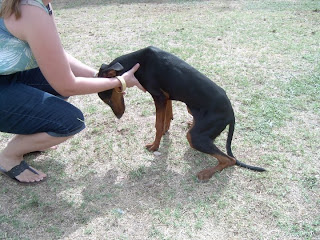 I saw the thread on Doberman Talk at 4:21, on my dinner break. I, mind you, am in central New York, while Abbey girl is in Texas. Totally nothing I can do. I put her on my Facebook, and tweet the Last Hope Dobermans link, figuring I can get her out there, at the very least. Doberman Talk, though, did better.

At least one of the members is also a member of Adapt Rescue, also in Texas. Well, they're full too. But, another member, in Colorado, could foster her (approved by a rescue there) so long as somebody could pull her from the shelter, and get her there. This was established within two hours, people. Then legs of transport were figured out, with stops, and set. Then, there's a Texas local interested in her as well, and they're working on whether that adopter might be approved or not.

So, be it foster in Colorado or a new forever home in Texas, Abbey is saved. This is the power of the Internet.
Posted by Jen at 12:00 AM