So, after I wrote A small rant the other day, I didn't anticipate having another such story to share with y'all.

This story is a bit more uplifting, anyway. 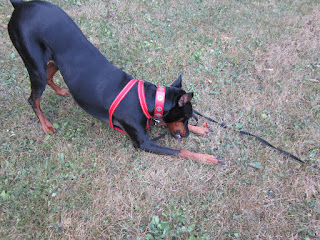 Elka and I were walking back home from the park, and on the same street at my prior rant took place. Perhaps we should take a different street? I'm getting awfully tired of these situations, which only seem to prove to Elka that other dogs are not to be trusted. I can't say I blamed her; if ever person I met ran at me screaming, I'd be a little leery and defensive.

But, anyway. We passed a house on which a woman was on the porch watering a hanging plant. I glanced at her on our way past, but she didn't appear to hear us. Then I heard her say something like "No" or "come back here" and heard the telltale jangle of tags and thought, "oh, here we go." This owner, unlike the last one, immediately said "I'm sorry!" and came to get her dog, as I turned and got Elka behind me. She and I and the little dog did another circle (he dodged his owner, who I think might have been wary of approaching the now growling Doberman) and ended up with me facing the little dog, and Elka behind me. I trusted Elka to stay behind me; I may have told her to do so. I honestly don't remember.

The little dog looked up at me. I'm not sure what his goal had been, really. He'd barked initially, but stopped. His face was shaggy so I couldn't see his eyes, and he had tiny ears also buried in his shagginess, so no help there. His tail was still, anyway. He looked like a 10 pound version of a Bearded Collie, which was odd. But, he looked up at me, and I looked down at him. I said "Go home." He stared(I think). As I had a handful of cheddar cheese cubes from my handy dandy dog treat training pouch, I tried the next tactic: I asked him "would you like a piece of cheese?" Slowly, I held it out. Slowly, he craned his little muzzle up and delicately took the offered cube of cheddar. "Now go home." He went home. I turned around, told Elka to heel, she did, and we went home too.

So, hooray to sharp white cheddar for diffusing the situation, and to Elka for listening to me and staying calm. In these situations, I try my darndest to keep the other dog out of her face. I don't want her to get blamed should a bite occur from either side. I really wish this nonsense would stop occurring; if you want to chill on the porch with your dog, by all means! Just have a gate up, or a tether for while you're there, something. I don't want anybody's dog to end up in the street, or picking a fight with a dog whose owner isn't able (or inclined) to keep them apart. 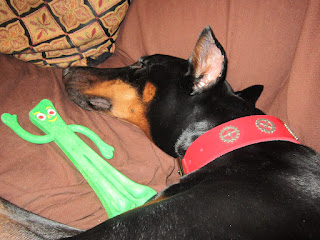