I certainly didn't (and still don't) have a finite "arc" for this blog in mind, so I guess it was inevitable I'd make 400 and beyond. I just wanted to mark the milestone!

So, what to talk about? Woefully unprepared, I asked on Twitter what the topic ought to be, and maggie68d helped me out. Elka, obviously. Her achievements and what we've been working on. I thought it a splendid plan! 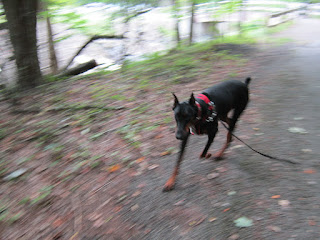 So, what have we been working on?

A year ago is when Elka earned her Novice Trick Dog title! I should say that we've really been cracking at that Intermediate Trick Dog title, but it isn't entirely true. See, they changed the list of tricks, just a bit, but enough to derail me. Elka is really still only a few tricks off of her second title. For reference, it's things like "shut a door", "hold an item for 5 seconds", and "roll over" (seriously, this dog does not like going on her back, and I'm not going to force her for the sake of a trick). She's sleep like this: 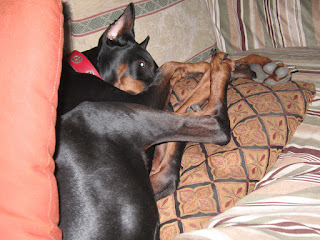 but lure her into rolling over? Nope.

"Shut the door" is one of those ones that mechanically, I have a notion of how to get things going.  There's just another step that I need to add: target training. This is when you use an item (frequently a washed yogurt lid, apparently), and shape your dog touching it with a nose or paw. When you move the target, you can then teach other behaviors. So, shut the door? Once your dog is comfortable targeting the lid, you put the lid on the door. Easy peasy, right? Well, yeah, unless a suddenly moving object freaks your dog out. Which it sometimes does Elka. Not always. So, something to work on, because who wouldn't love to say "Elka, go close the door" when you don't want to get your butt off the couch? 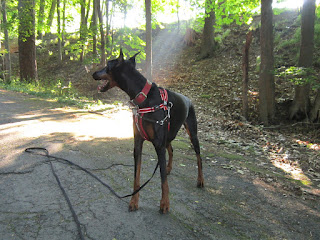 Other, less gimmicky things: Elka's loose leash walking, and focus on me while we're walking, is getting quite good. There are times where she looks at something exciting (squirrel, toddler, bicycle, other dog), and looks right back to me. I'm very proud of her! This is one of those instances where I really want to bugle about positive training methods. If I corrected Elka every time she got excited about another dog, or a bicycle, it would only confirm to her that these are things to be wary of (not that other dogs have been doing a very good job of that image themselves, what with all the barking/lunging/snarling we frequently see). Toddlers are something Elka is extremely fond of, and I certainly don't want to kill her joy of children, I just need her to not assume every kid wants to love her and be loved.

Her automatic sit, and wait (especially on street corners) is also fabulous. I like not having to worry about what it is she's doing, when I'm already worried about what crazy drivers are doing. 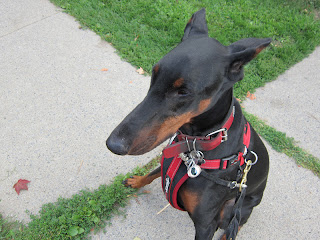 In the house, we work on things like barking, sometimes. Elka doesn't really nuisance bark; she alert barks, which one day is going to cause me to choke and die, I'm sure. If she hears a car door slam down the street, or people talking all of the sudden, she will bark once (but OH! What a bark it is!) and then go to the nearest thing to look through, be it the front door or the window. I would love to take my own advice on this and put barking on cue. Arguably, I do want to know if somebody's in the driveway or the yard. I just need Elka to understand that even though she can hear things from a block away, it doesn't mean they're pertinent.

We're also still working on getting the perfect "Out" from her when she needs to go out, and getting her to say "Hello". I'm not sure Elka is going to be one of those Talking YouTube Dogs, but the talking that she does do amuses me. And really, that's what it's all about. Elka makes me smile and laugh every day, without fail. Am I sometimes frustrated with her too? Sure, but that's the way it goes. There's the whining, which we also work on. There's the language barrier as well. There are times she's so close to getting what I say to her, but she still misses. There are also times that I swear she's trying to say something to me, and I don't get it either. So, we muddle through. 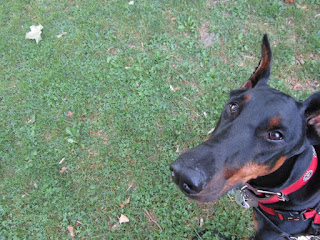