Like many people, I took advantage of the Free Lickety Stick promotion that was on Facebook a couple of months back. I received mine in the mail about two weeks back, but didn't really give it to Elka much. I think I was keeping it in mind as a treat to use on walks in the winter, when it was cold and I wouldn't necessarily want a handful of cutup hotdogs, but rather something I could handle while wearing gloves. It's even made in the USA!

Well, I'm glad that we tried it out earlier.

I didn't use the Lickety Stick as a treat on walks. I used it one Friday when we had some people over, but other people in the household were sleeping. The guests were reasonably quiet, but Elka was fidgety and wanted attention, and toys, and play. Sometimes telling her "The grownups are talking" works, other times not. We had gone for a good long walk earlier, and she had food, she was just more interested in ours. So, when I was done eating, I figured I'd get out the Lickety Stick (liver flavor) and reinforce good quiet behaviors; sitting, attention, etc. That worked out pretty well, actually. Or it did once Elka realized how it "worked". 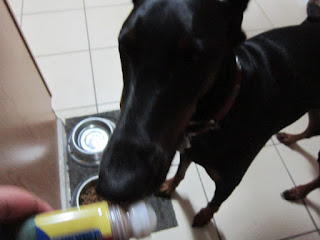 Fast forward to Saturday afternoon, when I get home from work. Apparently, Elka had diarrhea all day. Outside each time, no accidents in the house, but she had to go out many times, and it was liquid every time. Hmm. I couldn't think of why, as she'd had no people food, only had her regular walk treats, and some other crunchy treats we'd had before. Then my eye fell on the plastic Lickety Stick bottle. Oh.

Please correct me if I'm wrong regarding ingredient info, I'm not a nutritionist of any stripe, I just look things up when I have questions and try to draw good conclusions.  From what I see on the Interweb, Ascorbyle Palmitate isn't entirely necessary for Vitamin C, but isn't harmful, and I do know that Vitamin C itself is water soluble. Lecithin is in a lot of things, and can be sourced in a variety of ways. In foods that include Lecithin on Dog Food Advisor, it says that "Lecithin is believed to improve a dog's skin and coat". Similarly, "mixed tocopherols" don't seem to be considered a "bad" ingredient. Elka gets cheese pretty frequently, of varying types, and occasionally a lick of milk or cheese, so she isn't lactose intolerant that I've been able to tell.

So I guess that leaves "natural liver flavors" as a culprit? I'm not sure what the exact process is to make liver flavored liquid stuff for dogs, but I guess it isn't just putting a calf's liver into the blender.

It's also worth noting that Patricia McConnell posted on Facebook about one of her clients' dogs having swallowed the rollerball from a Lickety Stick The dog was okay, after a surgery, and the company says that it happens with fewer than 1% of the products.

So, I'll just be tossing the Lickety Stick, and Elka was solid again by the next day. It was free and there seemed to be no lasting problems, so no harm no foul. Some peoples' dogs might be perfectly fine with the ingredients, but princess was apparently not.