Back on July 16, I posted about Special Needs Dobermans, and about Whisper, the Doberman in West Virginia who was hit by an SUV, and whose owner needed help in providing her medical care.

Well, there is news! Thanks to the donations that came in to SND, Whisper was able to receive the initial care she needed at Virginia Tech, and get fitted for the orthotic that her leg would require.

Here she is, looking spaced-out and hopeful at the hospital: 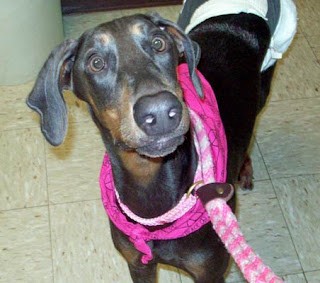 Now, to avoid further confusion, Whisper is not my Doberman; she's owned by a member of the Doberman Talk forum, which is why I'm familiar with what's going on. She's part of the big ol' Internet Doberfamily! 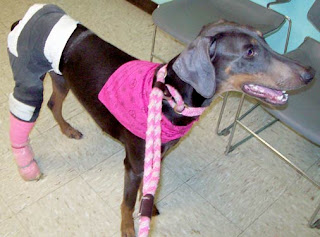 I can't believe it's been more than two months, really.  I'm sure Whisper's "mom" feels like it's been an eternity.  Especially because the first orthotic that Whisper received, paid for by SND, was in fact the wrong kind. Even though all of the paper work reflected the correct order, and every discussion had with the specialist,  Derrick Campana at Animal Ortho Care, confirmed the correct thing. He apparently feels it isn't his problem that he's taken money from a charity organization, and to date has not yet refunded anything for the incorrect medical equipment.  The delay that it caused in being able to get Whisper up and fully mobile again, with physical therapy, doesn't have a dollar amount on it, but that costs too.  So, shame on Mr.  Campana.  I hope he has the sense to make good on his mistake; I understand business is business, but a paid-for custom product is expected to be correct.  My understanding, further, is that there's a complaint in to the Better Business Bureau regarding these shenanigans, and the process with the Attorney General has been begun.

However, the good news is that Whisper's "mom" has been able to find another orthotic company, one that is apparently comparable to the original like day unto night (to paraphrase).  So, Whisper has her bionic leg now! 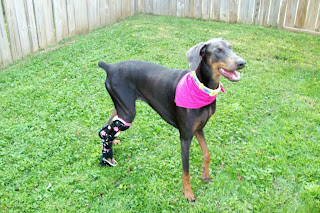 Doesn't she look like a happy cyborg dog?  Apparently the device takes some getting used to, but she's even made the attempt to run!  That shows she's feeling pretty perky, I would think; it's amazing how resilient dogs are.  Also, apparently Whisper is really a girly-girl, so she got some pretty pink flowers on her Terminator leg: 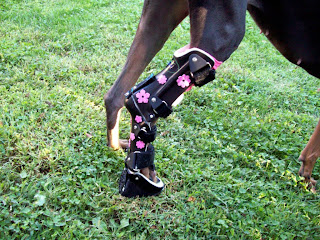 And so, with physical therapy and 6 to 8 months of wearing robo leg, Whisper will be re-evaluated, to see if she needs any further surgeries. Fingers (and paws!) crossed that she won't.  If her recovery is complete enough, she won't need to wear the orthotic 24/7 for the rest of her life, but only as extra support when she's active (again, paraphrased; I'm not a vet, nor do I play one on the Internet).

Well there.  So good news, and mixed news, and I hope I got it all right!  Special Needs Donations still has a page up just for Miss Whisper, if you're feeling generous.

Email ThisBlogThis!Share to TwitterShare to FacebookShare to Pinterest
Labels: Dobermans in need