Well, in Brighton, Colorado on July 31, an interesting thing happened. A run of the mill thing, really. Two dogs got loose, a pit bull and a Doberman. They were kind of freaked, and ran around for awhile, and were chased by people who were trying to catch them. They barked at people, and a lot of those people were scared and called the police. Once the dogs were finally caught, the owners were called. The Doberman went home. The pit bull is in danger of being euthanized for being "dangerous".

Not a single stranger was touched in this frightening barking spree. Nobody was jumped on. Not a paw or tooth was laid on a single person, by either dog. 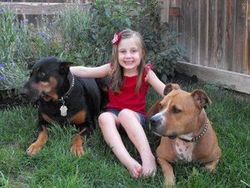 I learned on Doggies and Stuff that there is a ChipIn to help Dre's family with the legal costs.  Dogster has run the story as well. There is a petition to save Dre, where you can add your voice (the petition page is where the above photo of Dre and Machomotto is from). The goal is 100,000 signatures. Currently, they're at 55, 095. My understanding is that Dre's next hearing has been postponed until August 21; at that point, let's hope that the DA looks at the FACTS rather than emotional opinions. A barking dog is not a biting dog. A biting dog is a biting dog.
Posted by Jen at 12:05 AM