Dogs on Furniture: Have you got room?

Sometimes, when we have enough people over, poor little Elka doesn't have a place on the couch any longer. She'll wander around, whining occasionally, nosing people, and making herself a general nuisance. Sometimes, she'll sit in an easy chair behind me, and under absolute duress, she'll use her bed. 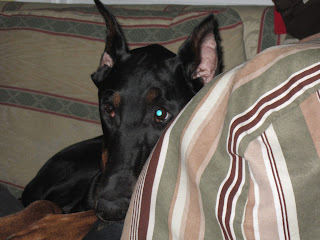 Once a seat gets vacated, she jumps right up into it and curls up, looking beguilingly at the seat's owner when they come back. This is where the "Off" and "Move" commands have come in handy. I've sort of idly been looking for one of those "bolster" or "couch" style of dog beds instead, but it's hard to want to shell out the amount of cash that most companies charge for a glorified pillow. Especially if she isn't going to lay on it!

Email ThisBlogThis!Share to TwitterShare to FacebookShare to Pinterest
Labels: dog bed, dog on furniture, move, off