I was mean to Elka today.

Not <i>mean</i> mean. Just..."testing her self control" mean. A little background: earlier in the day, I had given her a Monster Mouth. I noticed at the time, but didn't follow up on it, that one of the little molasses cookie treats I'd used to stuff it with had bounced out of the "area of play". Several hours later, Elka was chewing on something, which I instructed her to drop it. And she did.

So, I upped the ante.

That's right, my friends. I took a slice of apple, smeared peanut butter on it, put Elka in a down, and told her to "Leave it". And then, when I didn't quite have the picture I wanted, moved the apple. 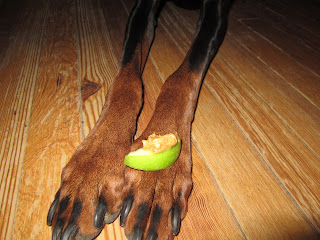 (I know,  her nails, we're working on it.) Pay attention to how awesome Elka's self control is instead. 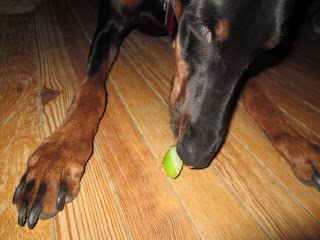 Then, when I said "Okay", it was like she didn't believe me at first. So then I said "Take it" and she did. 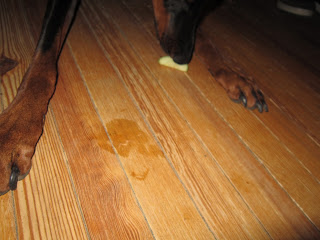 Somehow, she screwed it up, though, and ended up with peanut butter in one place and apple in the other. So then she had to lick the peanut butter off the floor, leaving a Doberman saliva smear. It looks kind of like a Rorschach, doesn't it?
Posted by Jen at 12:22 AM

Email ThisBlogThis!Share to TwitterShare to FacebookShare to Pinterest
Labels: leave it, self control, take it, tasty tuesday